There is just a different feeling in the air today. I’ve gone back and forth on why the air feels a bit different today, but the answer is simple: We. Have. A. Bracket.

The anticipation and excitement over what is to come in the NCAA Women’s Basketball Tournament is palpable. As buzzer beaters and upsets are certainly bound to happen, the question on everyone’s mind is simple: who is going to win it all?

I am going to play the role of spoiler here. Based on the previous 18 years (not including 2020 due to the cancellation of the tournament), I am going to tell you why, right now, there are three teams most likely to cut the nets down at the Alamodome.

Based on statistical information dating back to the 2001-2002 season, and not including the 2019-20 season, I used four sets of criteria to predict the teams with the best chance to win it all.

Over this time, UConn has been dominant. The Huskies have won nine national championships during this span. Baylor has won it three times, Notre Dame and Tennessee each account for two titles, while South Carolina, Maryland and Texas A&M have one each. Over the course of these 18 seasons, that’s just seven different winners.

When looking to predict this year’s winner, here is the criteria that I used.

Over the past 18 seasons, All of the national champions were ranked in the top-15 of the preseason AP Poll. Here are the top-15 teams from this season’s preseason poll:

With only two coaches (Mulkey in 2005, Frese in 2006) having won national championships in their first appearance in the last 18 seasons, I decided the 89% of champions who had coaches who had previously been to a Final Four, was too strong of a statistic to ignore. That  eliminated any school whose coach has not previously been to a Final Four. That eliminated the following schools that were ranked in the preseason AP top-15:

The lowest ranked team to win the title was UConn in 2003, who finished 18th in scoring offense that season. While some national championship teams have been ranked very low in scoring defense (next criteria), every winning team has been a consistently strong offensive team. Due to the fact that exactly zero national champions have been ranked lower than 18th in scoring offense over the past 18 seasons, I eliminated any team that isn’t currently in the top-18.

South Carolina, a team that I love to reach the Final Four, is just outside of the top-18. While it pains me to have to eliminate the Gamecocks, rules are rules. It still hurts though.

Louisville, another notably strong offensive team, as they are 13th in the country in scoring offense, come in at 103rd in scoring defense. That’s not going to cut it, as the Cardinals are also eliminated.

That leaves us with the three teams that have made it through all of the criteria unscathed, and with the best chance to cut the nets down this year. Those teams are:

The Bueckers Era has arrived

UConn, the preseason No. 3 team in the country, is currently 6th in the country in scoring offense and 3rd in scoring defense. Head coach Geno Auriemma will be seeking his 21st Final Four appearance this March, and his 13th in a row.

In my preseason prediction piece back in November I stated that “the Paige Bueckers era has arrived.” She has certainly delivered in her first season as a Husky, as the postseason awards and accolades will be plentiful. She has also helped lead the Huskies back to a very familiar position in March — a No. 1 seed.

Fellow freshman Aaliyah Edwards has also really come into her own this season as well, while Olivia Nelson-Ododa is playing with confidence and has competed well against some of the best post players in the country. A key difference-maker? Christyn Williams. She has quietly averaged 15.8 PPG, while acting as a veteran leader for this young team. Williams is key to UConn’s success this March.

The reigning national champions are back again

Baylor, the preseason No. 4 team in the country, is currently ranked 7th in scoring offense and 14th in scoring defense. Head coach Kim Mulkey is seeking her 5th Final Four appearance and her 4th national championship this March.

The Baylor Bears are still the reigning national champions and they have quietly been playing some fantastic basketball over the past two months. The Bears just won yet another Big 12 Tournament championship, following up on another regular season championship. Despite road losses to Arkansas and Iowa State, the Bears have overcome injuries and a slow start, as they have currently won 17 consecutive games, en route to a 25-2 record. NaLyssa Smith leads four players averaging double figures at 17.9 PPG and their defense has been spectacular as of late. They have given up over 60 points just three times in their past 13 games.

Stanford finished with the 15th best scoring offense and 8th best scoring defense in the country. Along with Maryland, the Cardinal have been one of the most impressive teams in the country over the past month. In the Pac-12 Tournament, Tara VanDerveer’s team defeated Oregon St. by 34 in the semifinals and UCLA by 20 in the championship game. That 20-point win over the Bruins felt like a lot more, as Stanford dominated the game from beginning to end.

Stanford is extremely talented, they have a deep bench, are battle tested, and are terrific on both ends of the floor. Haley Jones is a star and freshman Cameron Brink has improved tremendously since the beginning of the season and is a force inside for the Cardinal. Lexie Hull, Francesca Belibi, Anna Wilson, Ashten Precthel and Hannah Jump add to the depth for this team, but their most important player is senior Kiana Williams. She was terrific against UCLA and is a leader that this team needs to help them get to a national championship game.

The team with the biggest gripe

The Gamecocks are sitting just outside of the top 18 in scoring offense, at 20th right now. Defensively, they are just out of the top-50, sitting at 56th. No team in the country has played a more challenging schedule than Dawn Staley’s team has, as they compete in the toughest league in the country in the SEC, while also scheduling UConn, Iowa St., Gonzaga, and NC State in the non-conference.

Zia Cooke and Aliyah Boston make up one of the best guard-forward combinations in the country and Destanni Henderson, who is averaging 12.6 PPG, has been really good over the past month. Boston is a matchup nightmare and capable of going out and recording a triple-double every time out.

South Carolina is a great basketball team. Despite what these specific metrics might say, I had this team reaching the Final Four and the national championship game in my preseason preview. I don’t see that changing, in part because UConn is the No. 1 seed in the .

There you have it. All of the information you need to help predict this year’s national champion. I must say, however, when you are filling out your bracket please remember: anything can happen in March. 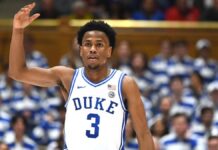 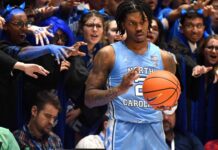