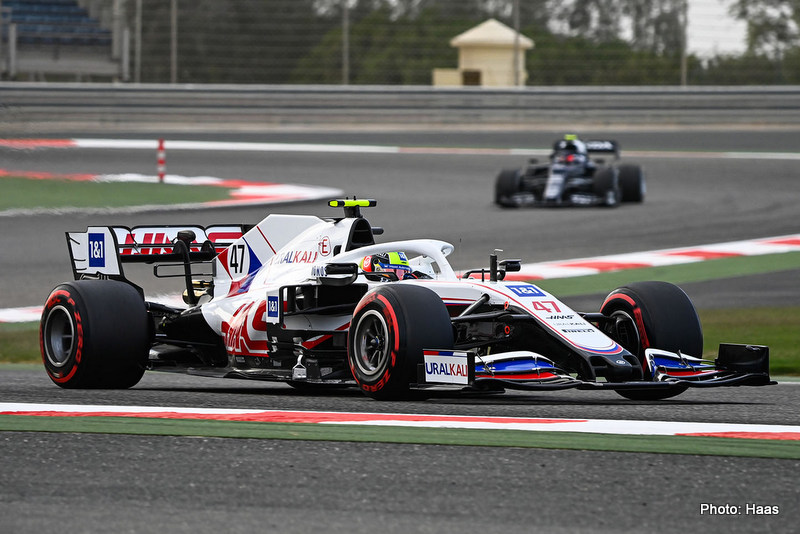 Mick Schumacher said that he felt at home after solid run during the afternoon session of Formula 1 pre-season testing in Bahrain.

The F2 champion completed 88 laps in his Haas VF-21 on Saturday after having his running limited on Friday, setting a fastest lap time of 1.32.883.

His time was only enough for 12th fastest on the day, but nonetheless, Schumacher was very positive about the mileage he managed to get under his belt, adding that his aim for Sunday was to just get more laps done.

“It was amazing today,” he said. “I really consider this as my first day in a way as yesterday was such a shame.

“Being able today to do things like consecutive running, going through C2, C3 and C4 tires, it’s been amazing. After two or three laps I really did feel comfortable in the car, which is promising, and it was a feeling that just increased over the day.

“By the end of the day I felt super comfortable – I felt at home. I feel like I’ve integrated with the team quickly, all the guys are really cool. I love working with them. I’m really looking forward to the season, it’s going to be great. But for tomorrow, I’m just after more laps, that’s our aim.”

“It was a pretty good day for us today,” he added.

“We did all our program and over 160 laps on track between the two drivers. We went through everything as planned, simulating almost all elements of a race weekend.

“Unfortunately, we couldn’t take part in the sim qualifying when it was getting fast, but the most important thing was that both guys got a lot of laps in so they can learn all the procedures. We continue to try to get them as ready as possible for the grand prix in what is a very short pre-season test. I’m very happy.”