The opening weekend of the NCAA Tournament was not going to stop the carousel from moving.

Multiple high-profile jobs opened and closed in recent days, led by Marquette surprisingly announcing Friday it was firing Steve Wojciechowski after seven seasons. Wojciechowski made two NCAA Tournaments in his time there (though it would have been three if there was a tournament in 2020) and finished with a 128-95 record. Marquette was 13-14 this season with an 8-11 Big East record.

Analysis on the MU opening can be found below.

The latest news: UNLV announced on Sunday it was promoting assistant Kevin Kruger to head coach. Kruger was on staff under former coach T.J. Otzelberger, who left for Iowa State.

Let’s step back and examine what’s happened around the sport with the carousel in the past week.

The biggest deal remains Indiana’s opening. An unidentified Indiana booster ponied up $10 million to pay for Archie Miller’s buyout, giving the school an opportunity to fire him after four seasons without having to pay said buyout with school funds. (That option was not an option at all.) So Indiana will be the best job on the market this carousel cycle, of course. IU will shoot for the stars, and in the end, it’s highly likely to land a big-name coach. The question is how long that takes to get done. If you’d like a deeper examination into the Indiana opening, our David Cobb has a look at some names, with some further intel from my end included in that story.

On Tuesday, New Mexico filled its vacancy with none other than Richard Pitino, who was fired at Minnesota on Monday night. Sources told CBS Sports that Chicago Bulls coach Billy Donovan was instrumental in helping get the deal done. Pitino, 38, went 141-123 in eight seasons at Minnesota with two NCAA Tournament appearance and an NIT championship.

Learn the latest in coaching news with this special episode of Eye on College Basketball dedicated to the coaching carousel.

Another hiring was put into motion Tuesday, then became official Thursday: T.J. Otzelberger leaving UNLV for Iowa State, where he was a former assistant. Here is my story on that. As these things go, a bigger job leads to a lesser job suddenly having an opening. And with Tim Miles heavily being involved at UNM before Pitino was the pick, maybe he’ll land (at a slightly better job) in Vegas? I’d have him atop my list if I was UNLV.

Tuesday’s big firing came out of Salt Lake City, as Larry Krystkowiak was sacked after a decade running that program. The Other Coach K was among the 15 highest-paid men in the sport, but two NCAA Tournaments in 10 years will send you packing at a job like that.

One contract extension of note from Wednesday: Drake locked up Darian DeVries in a new deal that goes through the 2027-28 season, effectively taking him off the market for this year’s carousel. The Bulldogs play Saturday in the first round vs. USC after beating Wichita State in the First Four Thursday night.

As for the other big jobs that are open, let’s do a boom-boom-boom with what to know. You’re going to see some names repeated below, and it’s with good reason. Plenty of these coaches will be, and should be, up for interviews. The coaches named are a combination of my recommendations, in addition to some intel from industry sources.

Marquette: A splashy hire is possible, just a matter of who Marquette can lure. The NCAA Tournament is likely going to impact the timeline here. Would John Beilein return to the Big East and take this job? Loyola Chicago’s Porter Moser would seem to be a top priority, but that will have to wait as his Ramblers are into the Sweet 16. Marquette’s fan base holds its coaches to a high standard, and this will be a fervently tracked process.

Utah: With Krystkowiak out, Utah becomes the second-best job to Indiana available. Historically it’s one of the 20 best in college basketball history. It’s in a great city, and those familiar with the college basketball scene Rockies-west will tell you that should be a top-four Pac-12 team two out of every three years. The two in-state coaches will obviously be linked — BYU’s Mark Pope and Utah State’s Craig Smith — but this job will truly have a national search behind it, and if it ultimately brings in an outside-the-box hire, I would not be surprised.

Minnesota: With Pitino off to New Mexico, names Minnesota should consider include these sitting head coaches: Arkansas’ Eric Musselman (probably has to be option No. 1), San Diego State’s Brian Dutcher, Porter Moser, Craig Smith, Cleveland State’s Dennis Gates and Colorado State’s Niko Medved. That’s a start. Feels like the school should have a lot of good candidates to consider.

DePaul: Dave Leitao is out, and athletic director DeWayne Peevy gets his first chance to make a hire that can transform a dormant program. Sources say the school will cast a decently wide net, but it feels like New York Knicks assistant Kenny Payne, along with Gates and Moser, are the top three options to consider here. You’ll get a yes from at least one of those, and I’d lean that the next coach will come from this group.

We’ll continue to update news here as it comes in. Here are the 33 jobs that have changed to this point. Kentucky basketball to retire jersey in honor of Tubby Smith during game vs. High Point in December 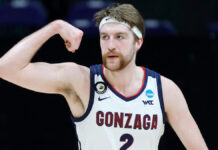