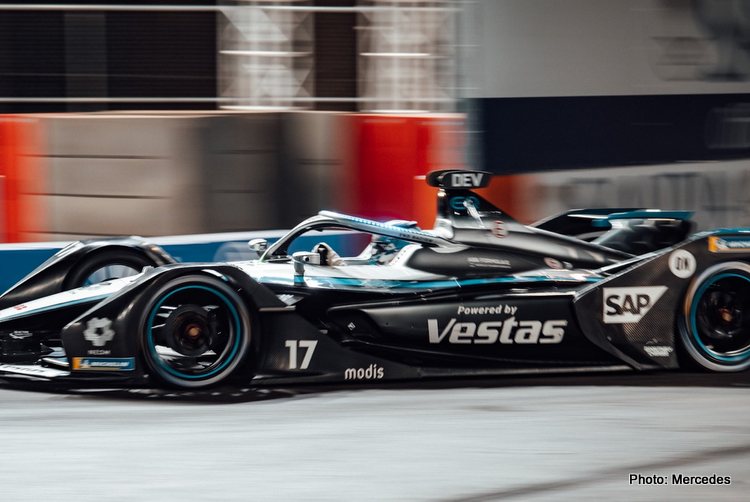 Starting on pole after a dominant qualifying performance, the Dutchman earned Mercedes a second consecutive win after they won the final race of the 2019-20 season in Berlin.

De Vries was fastest in both practice sessions and throughout qualifying and rarely looked under pressure, despite the efforts of Edoardo Mortara who came second in the Venturi.

Jaguar’s Mitch Evans rounded out the podium, having come out on top after a gripping battle with Rene Rast of Audi, who had to settle for fourth.

The race had got off to a fairly restrained start, with De Vries leading away from Porsche’s Pascal Wehrlein, who started alongside him on the front row, Rast and Mortara.

Wehrlein’s race came apart though as he was passed by Rast for second, before being on the receiving end of a stunning double pass on the back straight by Mortara, who jumped from fifth to third in one move, before taking second from Rast when the three-time DTM champion took attack mode.

The German’s day nearly got worse as he began to feel pressure from Mahindra’s Alex Lynn and Jaguar’s Sam Bird, but the two British drivers clashed, forcing both to retire and bringing out the safety car.

De Vries had an excellent restart and extended his lead before taking attack mode, a strategy that worked perfectly as shortly after BMW’s Max Guenther hit the wall and brought out another safety car which came in with just six minutes remaining.

Immediately after the restart, Mortara took attack mode, falling behind Rast in the process, but he quickly reversed that to secure his second-place finish, with Evans snatching the final podium position with just a few laps to go.

Wehrlein finished fifth, while Oliver Rowland of Nissan e.dams claimed sixth after a strong drive from 11th on the grid, just ahead of Mahindra’s Alexander Sims in seventh.

Last year’s champion Antonio Felix Da Costa finished just outside the points in 11th, with Jean Eric-Vergne stuck in 15th, as both failed to fully recover from a difficult qualifying session.

Formula E returns tomorrow for the second race of the 2020-21 season as the drivers tackle the Diriyah Street Circuit once again.