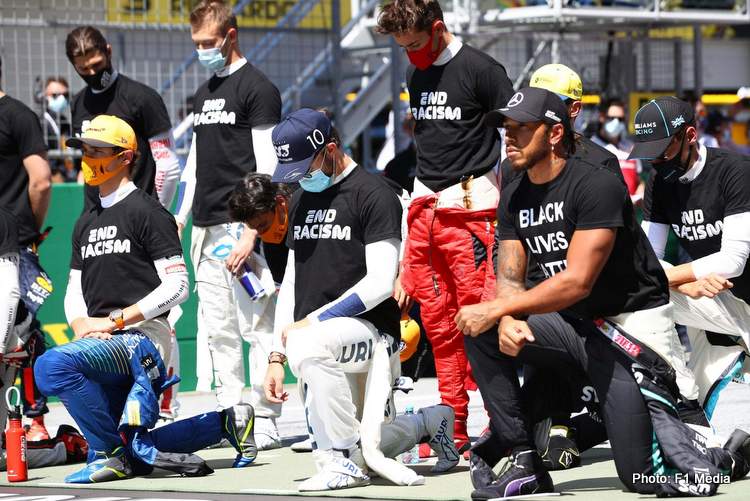 Bernie Ecclestone has kicked a hornet’s nest by declaring that seven-times Formula 1 World Champion Lewis Hamilton is being used by the Black Lives Matter movement and says he would not condone such protests had he been in charge.

Interviewed exclusively by the Telegraph, Ecclestone said: “I’ve said to his father[Anthony Hamilton] that Lewis needs to be careful because he’s being used by the people who are supporting this Black Lives Matter and they are taking a lot of money from it. And nobody knows where it goes.

“They make a lot of fuss over things for the wrong reasons. For political reasons,” added Ecclestone.

The 90-year-old ruled over F1 for nearly half a century but was ousted when Liberty Media purchased the sport. However, this has not stopped the former supremo from having his say.

In 2020, on course for his Michael Schumacher record-equalling seventh title, Hamilton found extra motivation from the BLM cause he trumpeted during the course of the season, urging some of his rivals to take a knee with him ahead of each race, wearing protest T-shirts and doing Black Power salutes on the podium.

During an interview with BBC after winning his seventh F1 title last year, he told BBC: “It was a different drive than what I’ve had in me in the past – to get to the end of those races first so that I could utilise that platform and shine the light as bright as possible.”

As for taking a knee for the first time, at last year’s season opener in Austria, Hamilton said: “Awareness has been raised. We don’t need it to die a silent death with no change. I can be the guinea pig and keep speaking out. But nobody should be forced into a scenario where they have to kneel.

“I am really grateful to those who did it along with me. It is a powerful message, but whether you kneel or do not kneel, it is not going to change the world. It is a bigger issue than that. Everyone has a right to that choice and for me kneeling was the right thing,” he on the day.

In 2021, Hamilton is the favourite to win the World Championship again, despite a below-par preseason testing performance by Mercedes, the 36-year-old hunting an unprecedented eighth F1 title.