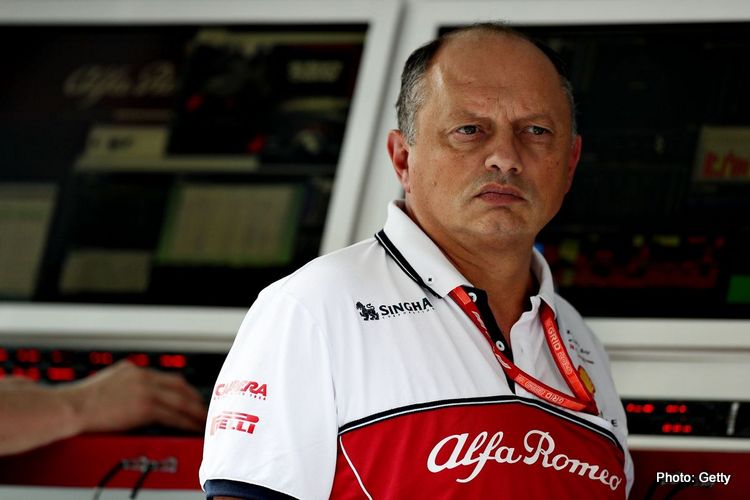 Alfa Romeo team principal Frederic Vasseur believes that Ferrari will recover a large part of the power deficit they suffered from in 2020.

Alfa Romeo took the wraps off their 2021 challenger – the Ferrari-powered C41 – on Monday in Poland’s capital city Warsaw. The new car sported a striking new livery in addition to a new nose, front end architecture and other changes in response to the revisions in technical regulations implemented by the FIA for this year.

Ferrari, who power the Swiss outfit along with Haas, had to revise their power unit for 2020 after their controversial saga with the FIA in 2019. Their subsequent 2020 power-unit was down on power as a result, but the Scuderia have since developed an all-new engine for the upcoming campaign and seem happy with the outcome.

The 2020 season was a year to forget for Alfa Romeo as they endured a dreadful season finishing a lowly eighth in the constructors’ standings, with the underperforming Ferrari power-unit one of their major weaknesses.

However, Vasseur seems confident that his team can perform better this year.

“The collaboration with Ferrari is I think going very well,” he said. “We had a strong meeting, a long meeting over the winter to cover the points of last year when perhaps we didn’t do the perfect job.”

On the new power-unit, Vasseur predicted: “We are on a good path. I think that on their side, they will recover probably a large part of the issue that we had last year, and collaboration is getting better and better.”

Discussing his team’s technical collaboration with Ferrari, he added: ”We won’t be taking some of their car, perhaps one or two elements, but not much more. But I think it’s not the key point of the collaboration.

“The key point of the collaboration is to be convinced that we can learn from each other. In the scope of the regulations, we have to play with this, and we have to do the best job that we can do.”

Alfa Romeo will run their new car for the first time on February 26 in Barcelona as they prepare for the new Formula 1 season which is set to start in Bahrain on March 28.