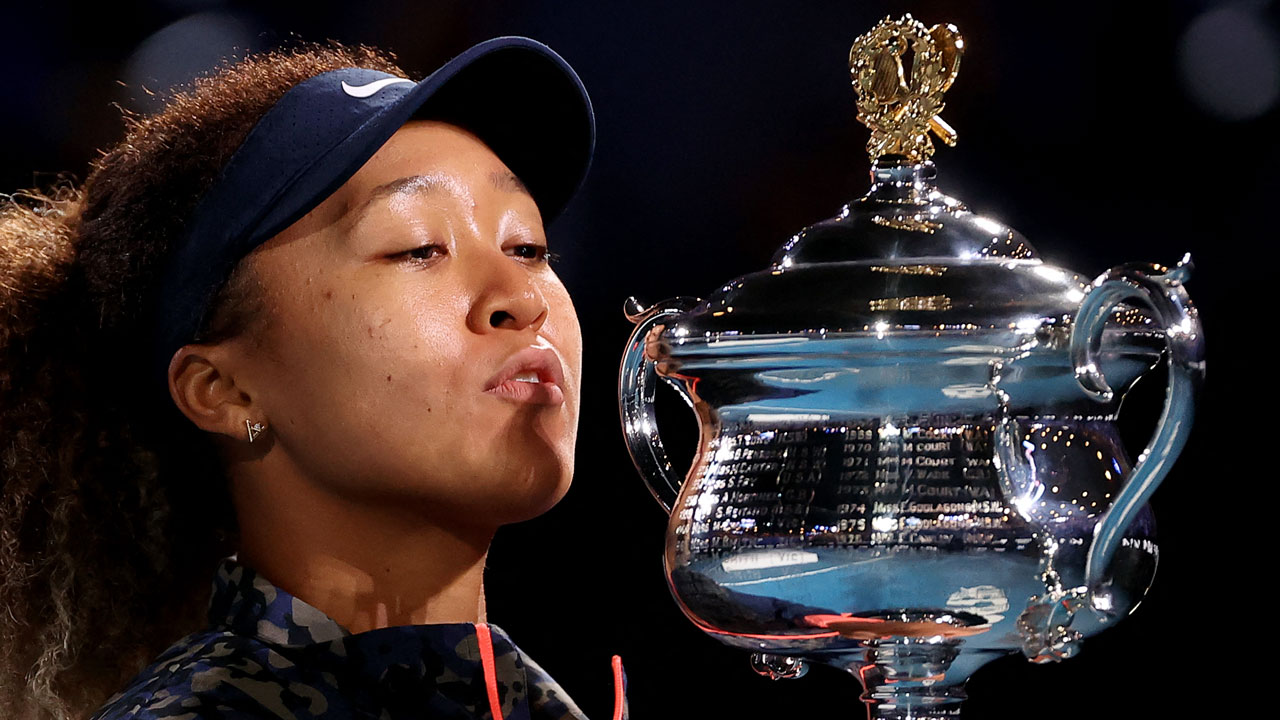 Japan’s Naomi Osaka kisses the Daphne Akhurst Memorial Cup trophy after beating Jennifer Brady of the US to win their women’s singles final match on day thirteen of the Australian Open tennis tournament in Melbourne on February 20, 2021.David Gray / AFP

Third seed Osaka preserves her 100 percent record in Grand Slam finals after winning the 2018 and 2020 US Opens and the 2019 title in Melbourne.

The reigning US Open champion, who beat her idol Serena Williams in the Melbourne semi-finals, has now won two of the last three Grand Slams as her status and reputation soars.

“We played in the semis of the US Open a couple of months ago and I told everyone that you’re going to be a problem,” Osaka told Brady at the trophy presentation.

“And I was right. It’s really incredible to me to see your growth over the past few months, it’s really cool for me to see.”

Osaka, 23, is only the third player after Monica Seles and Roger Federer to win their first four major finals, and will now rise to second in the world rankings.

She saved two match points in the fourth round against Garbine Muguruza and swept past Williams in straight sets in the semis.

On Saturday, Osaka wore down fellow big-hitter Brady, and then lifted her racquet above her head in celebration of her win as the crowd roared.

After sealing back-to-back Slam titles twice, Osaka has won half the majors she’s contested since beating Williams to win her first in 2018.

“Thank you for coming and watching, it feels really incredible for me,” she told the crowd, which was capped at half-capacity over coronavirus concerns.

“I didn’t play my last Grand Slam with fans so just to have this energy really means a lot.”

The Japanese survived a seesaw start to gain control, reeling off six straight games en route to the title.

It was a rematch of last year’s epic US Open semi-final, described by some as the best match of 2020, but Osaka triumphed far more comfortably on this occasion.

Before the match, Osaka had pinpointed her return as the key, but she was helped out by a shaky Brady who lost her serve in the fourth game after two double faults.

But Brady, the 22nd seed, hit back with a break and she continued to pile pressure on Osaka’s serve.

A brilliant lob winner, showcasing her trademark athleticism, gave a pumped-up Brady a break point in the ninth game, but Osaka held on.

Brady then played a sloppy game on serve to hand over the set to Osaka, who had a 20-0 record at Melbourne Park when winning the first set.

Osaka gained a stranglehold with an early break in the second set and fired down an ace to skip out to a 3-0 lead, followed by a roar of “C’mon!”.

Brady attempted a late rally, but a calm Osaka was not to be denied.

Brady’s resilient run ended after serving 14 days’ hard quarantine before the tournament, unlike other players who were allowed out of their hotel rooms to train.

Despite the defeat, Brady will rise to a career-high 13th in the WTA rankings.