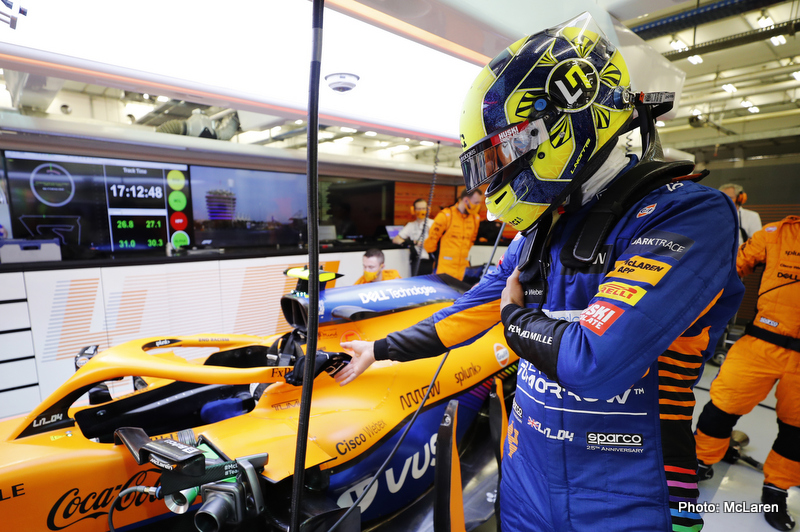 Lando Norris believes that McLaren possess better race pace than qualifying pace, with the 21-year-old suggesting Ferrari may have the advantage on Saturdays.

Norris qualified seventh ahead of the season-opening Bahrain Grand Prix, one position behind his new teammate Daniel Ricciardo. Meanwhile, the Ferrari of Charles Leclerc was fourth on the grid.

During the race though, the McLaren youngster made the most progress, passing both his teammate Ricciardo and Leclerc on the way to a fourth place finish.

Speaking after the race, Norris admitted he had a “better car” in race trim, but felt it was “50-50” between McLaren and Ferrari overall.

“More because I overtook Charles five, six, seven laps into the race rather than at the start,” he said, as reported by RaceFans. “That was because we just had a better car and some better speed.

With Bahrain being the first race of 23, Norris cautioned that it would take time to come to a full conclusion, but explained that qualifying pace had been a slight weakness for the team in recent years.

“Saturdays are difficult for us, I think, a little bit like last year,” he added.

“But we’re at race one and it’s Bahrain, a track normally we do quite well at. So we need to be at some different tracks a little bit more often, we have to see after some more tracks where we really stand. Todt: Max is like Kimi, very different to Lewis Ricciardo: I am not able to get the car working well