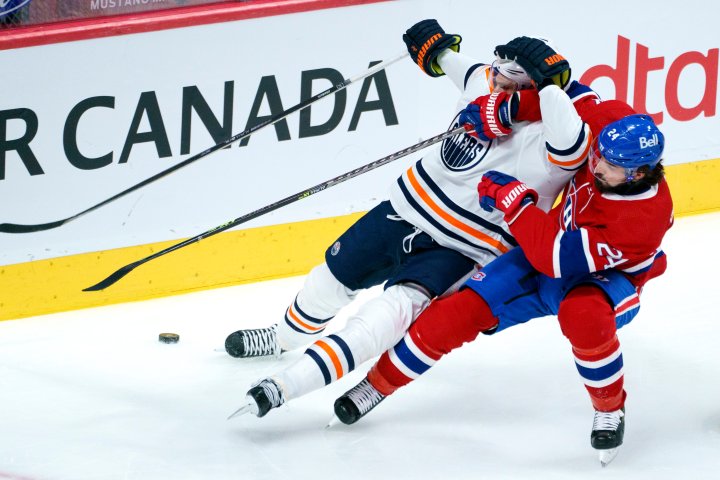 Another tough night in Montreal.

After being beaten soundly by the Habs 4-0 last week, the Edmonton Oilers played their division rivals much tighter Monday night, but still ended up with a loss.

Eric Staal scored the overtime winner in his first game with the Montreal Canadiens after being acquired from Buffalo to give the team a 3-2 win over the Edmonton Oilers Monday night.

“This is the kind of game you’re going to see night in and night out,” Oilers head coach Dave Tippett said after the game. “You better be ready for it, because that’s what playoff hockey is.”

The Canadiens outplayed the Oilers in the first, outshooting them 15-5. However, the Oilers took the lead at 19:39 of the period when Devin Shore beat Montreal goaltender Carey Price in tight.

The Oilers struck in the final minute again the second. Darnell Nurse fired a slapper past Price on the power play for his 13th goal of the season. It came at 19:49 of the frame.

“Best way to protect the lead is to play in the other team’s end, and in the first five minutes, we were just too passive,” Tippett said.

With 57.5 seconds left in overtime, Staal came down the right wing and snapped a shot past Smith on the blocker side.

“We haven’t played in overtime much — three or four times,” Nurse said.

“You’ve got to try and create something in those situations and they did. That’s why they’re going home with two points and we only get one.”

The Oilers (23-14-2) will play in Ottawa Wednesday and Thursday and then in Calgary on Saturday. The team’s schedule was adjusted Monday afternoon because of the Vancouver Canucks’ COVID-19 situation. The second game in Ottawa was originally set for Friday, while Saturday was originally an off day.

–With files from 630 CHED’s David Boles