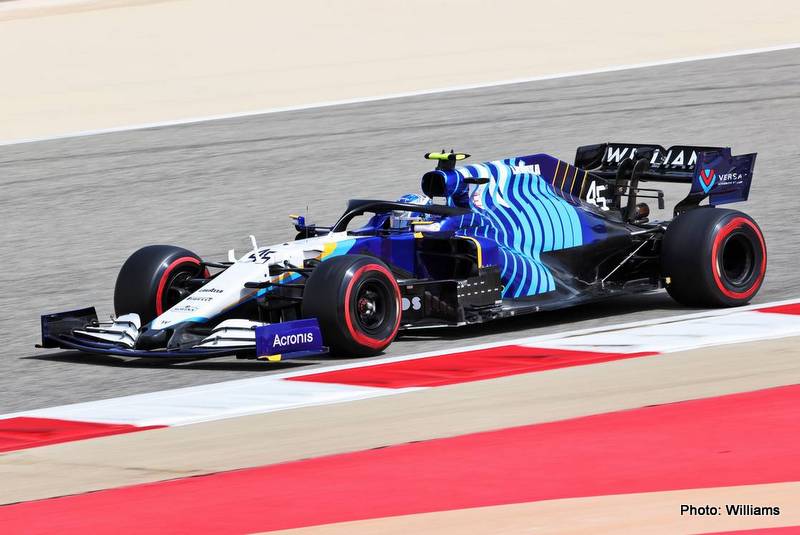 Williams head of vehicle performance Dave Robson has revealed that the team are bringing “a couple of new items” to the opening race of the 2021 Formula 1 season in Bahrain this weekend.

The Grove-based outfit had a steady run in pre-season testing, completing the most laps of any of the Mercedes-powered teams.

Williams will be hoping to show signs of improvement at the opening race after the team finished last in the constructors’ championship last season for a third year in a row.

While they showed a significant improvement in qualifying speed compared with 2019, they still lacked the race pace required to get into the battle for points on a regular basis.

George Russell and Nicholas Latifi were retained as their drivers over the off-season, with both hoping to score their first points for Williams.

Looking ahead to the season opener, Robson said: “The three days of pre-season testing went well, with the car running flawlessly throughout. Although the conditions were tricky at times, we learned a lot about the car and have now had time to look through a lot of the data that we collected.

“With the cars having stayed in Bahrain, making changes is a little more difficult than normal, but nonetheless, we have a couple of new items to look at this weekend as we seek to improve the performance of the FW43B.

“With both drivers having enjoyed high mileage test days, including race-style running, they are both in a good position ahead of this weekend and are comfortable with both the car and the track. We are all looking forward to getting back to racing and hope that we can start the season off with a positive result here in Sakhir.”

Russell, who starts his third season with Williams this weekend, added: “I’m excited to get the season underway and be back out on the track. I’ve been out in Bahrain since the test a couple of weeks ago, so I’ve been able to do lots of training in the sunshine and I’m feeling ready and motivated for the year ahead.

“Bahrain is a tricky circuit with a rough surface and some tough corners, especially turns nine and 10; not being able to attack them makes it difficult for the drivers and everyone is always locking up. But equally, racing at night is beautiful. Even though it’s a newer circuit, there is character and a special atmosphere here, so it’s a nice track to go to. As always, we’ll do our best and I’m looking forward to getting back to racing.”

Meanwhile, Latifi, who lost out to Russell in qualifying at every race weekend last season, said: “It goes without saying that I’m super excited for the first race of the year! The pre-season run-up has obviously been a little different to normal with the shorter schedule test taking place in Bahrain and only having one day in the car, so I’m looking forward to getting back out on the track.

“It’s been a huge amount of hard work from everyone at the factory and here at the circuit to get everything ready to go, so I’m incredibly excited and motivated to start the new season and see what kind of progress we can make this year.”

Williams hit the track for the first free practice session of the season on Friday morning in Bahrain.