Entering his fourth NFL season, Jackson is eligible for a new contract for the first time and has earned a raise from this year’s $1.771 million base salary, which ranks 24th among all quarterbacks.

Jackson is certainly the game’s most electric player with the ball in his hand, a highlight waiting to happen every time he sprints in the open field. He has strides to make as a passer and in the postseason, but no one can dispute he’s won more games (30) than any other quarterback since taking over as the Ravens’ starter midway through the 2018 season and has spearheaded the highest scoring offense in the league over the past two years.

Just like Jackson’s skill set, the Ravens’ negotiations with the former NFL MVP are shaping up to become equally unique. His running style and lack of an agent represent new territory in the quarterback contract landscape.

Last month, Ravens general manager Eric DeCosta said he had one-on-one conversations with Jackson about the framework of a long-term deal but indicated formal negotiations have yet to begin. Ravens coach John Harbaugh recently said he’s “totally certain” Jackson’s extension will happen this year or next.

Should the Ravens have concerns about giving a potential record signing bonus to a quarterback who runs more than anyone else in NFL history?

Warner: The initial reaction is always going to be yes. Any time somebody puts themselves in harm’s way more than somebody else, there’s going to be more risks involved with signing that guy. The other part that I’ll say though is Lamar is so unique and so different that you can’t just say, ‘Oh, he’s another running quarterback.’ Because that’s not who Lamar is. Lamar is a difference-maker. He’s different when he runs and he avoids so many hits. But does he get hit more than most quarterbacks? Yeah, he sure does. He puts himself in those spots because of what they do offensively. You’re probably not going to give Lamar Jackson a 10-year contract like Patrick Mahomes because you don’t know what the wear and tear is.

Corry: As much as I’d want the cost certainty of a long-term deal Patrick Mahomes signed, I would be reluctant to go that route with Lamar just because we’ve seen over time that running quarterbacks don’t last if they continue to run, particularly at the rate Lamar has. What I expect to have happen with Lamar is he’s going to progress as a passer. As he gets in his late-20s, he’s not going to be running nearly as much as he used to and it’s going to be more of a traditional deal. It will be like the four-year extensions that Jared Goff, Carson Wentz and Deshaun Watson signed.

Tannebaum: Well, it’s a good problem to have because he is a dynamic player. There certainly would be a lot of teams that would like to have that problem. The ball’s going to be in his hands a lot more than others, so you are a little concerned. On the other side of it, one thing he does a good job of is he is really good at making people miss. When you think about the history of the game — Tony Dorsett, Curtis Martin, those sort of runners — they have sustainability because they don’t get hit and take the big shot. 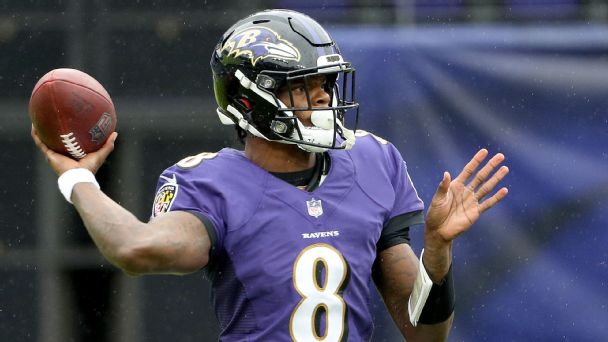 Should Jackson wait for Josh Allen and Baker Mayfield to sign their extensions (so he can top theirs) or does that matter?

Warner: To me, as long as I’m paid in that category and if I want to be a Raven, then I sign the deal whenever they bring the deal to me. I don’t worry about ‘Do I end up making $1 million more per year than Baker or Josh Allen?’ That to me doesn’t factor in. All of these guys are going to be paid so well they’re never going to have to worry about anything in their lives again. Knowing Lamar, he’s such a humble guy, I think he’s going to be ‘I want to play my whole career with the Ravens.’ You’re giving me a top notch deal and I’m taking it and we’re going to play. I also believe that, if you want to win, sometimes you take a little bit less as long as you’re still in the category that you want to be in, and you say, “Hey, give me some more pieces around me, and let’s go win some championships.”

Corry: There’s a unique dynamic in Lamar’s case, which doesn’t exist with any other quarterback that he doesn’t have a traditional agent. We’ve seen with guys have gotten deals done at a high level without an agent and using advisors, and they’ve done very well. But we’ve never had a deal which would be of this magnitude without an agent. So I don’t know whether that would force Lamar to err on the side of caution and try to wait for Josh Allen. But typically, you have some agents who take the position that I’m gonna let this guy solidify the marketplace even more and try to leapfrog him. And other [agents] figure if I can get the deal I want, I go from there. I really don’t know which way Lamar would go because of the unknown variable. I’m curious to see how that part plays out.

Tannebaum: If I’m him, I’m somewhat interested in those guys. But it’s different because of where he was picked [the last pick in the first round]. He doesn’t have truly transformational life-changing money [Jackson’s rookie deal was four years, $9.5 million]. Do you want to wait another six weeks and maybe get a little bit 2% or 3% more? Everyone’s going to be different, but I think where he was picked would lead me to think that those deals aren’t as relevant or impactful as getting his deal done.

How much of a hurdle is Jackson lack of an agent present for him and the Ravens?

Warner: I never explored that world [without an agent]. I never wanted to get into that world. I never wanted to be the guy that was in that room. What you realize is organizations, as much as they love you, they’re going to try to find those little holes that say, “You don’t do this as well or you don’t do that as well.” You have to be able to understand it’s negotiations and no love lost when you come out of that room. That’s a hard thing to do. We pay 3% and say, ‘Please, you take care of all of that junk.’ My perspective was ‘I’m going to make the money and you can have 3% because I want you to deal with this and I don’t even want to hear those things.’

Corry: It’s not like the rookie deal, which is slotted where you could have gotten the same deal as Tom Condon, Todd France or Drew Rosenhaus. This is a whole different dynamic, so it potentially could set up for the Ravens being able to take advantage of the situation. We saw Ronnie Stanley who had Roc Nation representing him. That deal came in under what I thought it would. Laremy Tunsil, who coincidentally didn’t have an agent but had advisors, re-set the tackle market at $22 million per year. I thought Stanley would at least be over $20 million but he came in under $20 million per year and then you saw David Bakhtiari leapfrog both of them. So the Ravens drove a hard bargain with an agent. Without an agent or an advisor, they could get a deal which is really advantageous potentially.

Tannebaum: Generally speaking, I didn’t like dealing with a player because candidly, nothing good came out of it. I like it from Lamar because he’s such an authentic person that it kind of fits him. But if I’m the Ravens, who is he dealing with? Is it a lawyer? Is it a family member? So that is a very weird and interesting dynamic. Agents play a meaningful role. You want that buffer. You just don’t want things to be taken out of context.

Where does Jackson’s contract ultimately fall? Will it get close to Mahomes’ NFL-record $45 million per season? Or will it drop closer to Watson ($39 million per year) or Prescott ($40 million)?

Warner: This business is so crazy. Sometimes it just becomes the next guy up gets the most money. Patrick Mahomes is the best quarterback in our business, and Patrick deserves to be the highest paid quarterback. Does that mean that will always be the case? No. I think Lamar should probably slide in right by DeShaun, but not where Patrick is. But we’ve seen numerous times where the highest paid guy is not nearly the best player in the league at the position. So I don’t try to gauge those things.

Corry: I don’t think Josh Allen or Lamar Jackson are surpassing Patrick Mahomes. The two most relevant data points for both those guys are DeShaun Watson and Dak Prescott. I think the deal’s going to be in that range. Maybe they go a little above Dak Prescott. But the one thing I would be interested to see what happens with Lamar is these [other quarterbacks] have been giving up four more years. The Ravens have been wanting more than four new years. They got five new years with Ronnie Stanley, so I wouldn’t be surprised if they tried to get five new years with Lamar. Personally, if I’m Lamar, I want to try to go three [years], since we now know the TV money is solidified and hopefully the cap’s going to start going up.

Tannebaum: I would say around $40 million is probably the range. There could be certainly more in terms of where the guarantees are, how the money becomes guaranteed, and again, we were talking earlier about Lamar not having an agent. The Ravens aren’t going to be unfair, but they’re also going to be handling what’s important to them. … You have to choose carefully who you’re going to pay and why. He’s somebody you’re lucky to have and you’ve got to keep him and realize ‘Hey, we can’t keep Matthew Judon and Yannick Ngakoue and that’s OK. You know why? Because they’re replaceable and Lamar isn’t.’