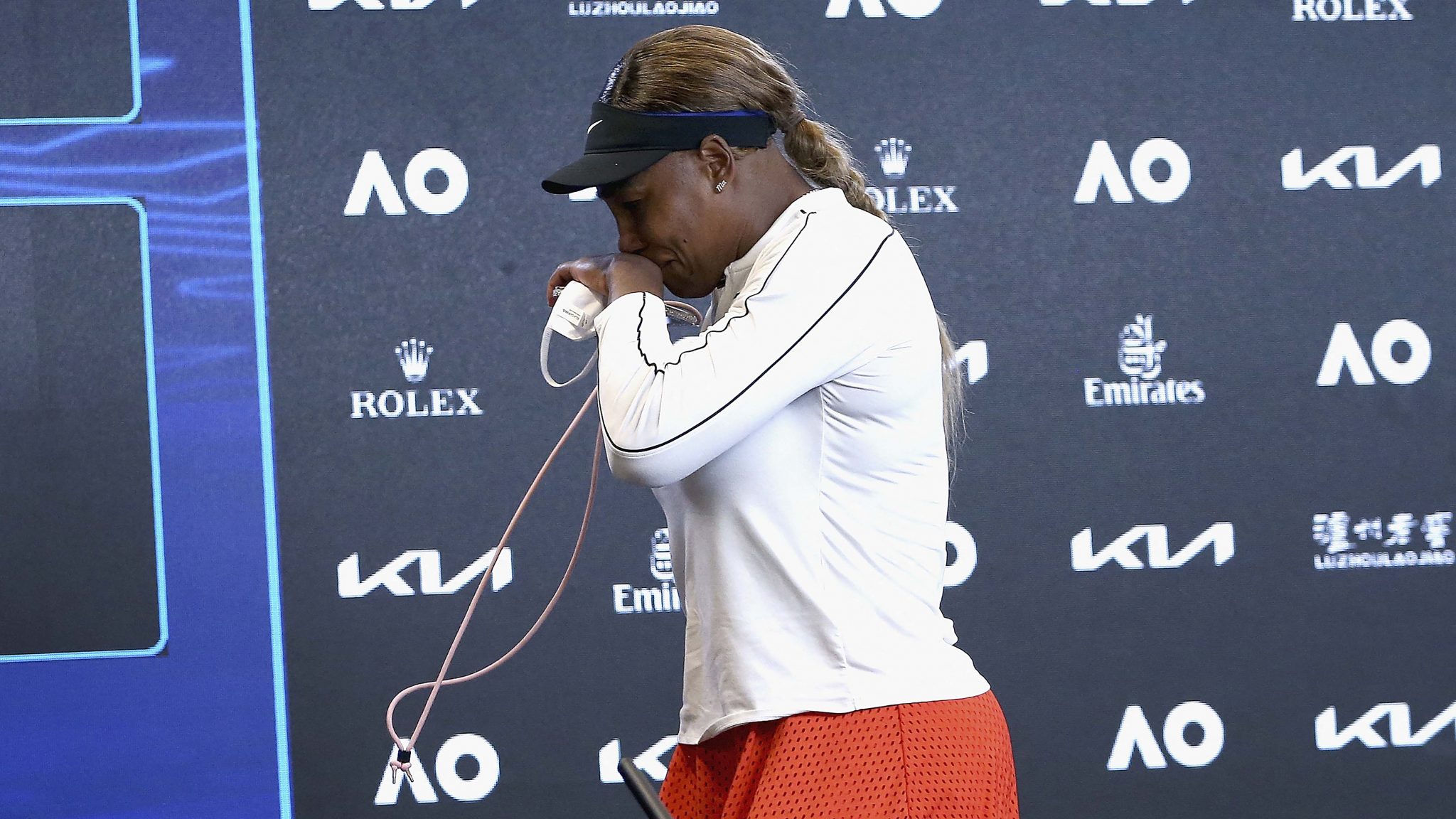 This hand out photo released by the Tennis Australia on February 18, 2021 shows Serena Williams of the US gets emotional at a press conference after losing her women’s semi-final match against Japan’s Naomi Osaka on day eleven of the Australian Open tennis tournament in Melbourne. (Photo by ROB PREZIOSO / TENNIS AUSTRALIA / AFP)

Serena led 40-15 but brought back to deuce. A lounging backhand was flicked by Serena to get first advantage but Osaka deuced again with forehand winner. A net-cord assisted Osaka to get the opportunity and the break for two-all.
Osaka came from 0-30 in third game and saved break point 30-40, but needed two more advantage points to win the pivotal game. Serena conceded a break for a run of four straight games for Osaka who hit an ace to take the seventh game. Serena held her serve for 5-3 and yelled “come on” to pump herself but her opponent served out the set 6/3 in 38 minutes.

Serena lost the first point of the second set and yelled after taking the second.

However, she hit a forehand into net for the break and Osaka’s lethal backhand clinched the game. The two players held serves to 4-3. In the eighth game, Osaka committed two double faults to 0-40, saved two break points but conceded the game.
In the ninth game, Serena fell behind 0-30 from two winning shots by Osaka, then double faulted and lost serve from Osaka’s crosscourt backhand winner.

Osaka got two service winners to reach 40-0 and a Serena backhand shot landed in the net for the game and set 6/4 in 37 minutes.

In the interview on court after the match, Osaka said, “It is an honour to play against her (Serena). I was a little kid watching her play. But now, she is another competitor. That is sport.”

Novak Djokovic showed no signs of body ailment as he rolled over his opponent. He committed just one unforced error in a 53-minute segment of the match. He sealed the victory with his 17th ace. The day, however, was special for his gallant opponent, Aslan Karatsev.

The 27-year old Aslan arrived in Melbourne Park ranked 114 in the world after winning three Australian Open qualifying matches in Doha. He had lost in the final qualifying round at the 2015 U.S. Open, as well as in Roland Garros 2016 and 2020. He succeeded this time in his 10th attempt and became the first man in the open era to reach the semi-finals of a Grand Slam on his debut. He credits his success to his coach Yahor Yatsyk from Belarus.