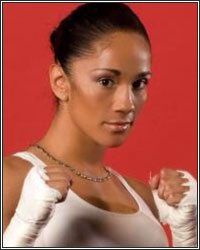 In the first world title fight to headline a Ring City USA event, Amanda Serrano continued her impressive march to the International Boxing Hall of Fame with a commanding ninth-round knockout win over Daniela Bermudez to successfully defend her WBO and WBC featherweight world titles, live on NBC Sports Network from Plaza del Quinto Centenario in Old San Juan, Puerto Rico. The matchup of two of the best pound-for-pound fighters in the women’s ranks closed out Ring City’s three-event residency on the island.

Seven-division world champion Serrano (40-1-1, 30 KOs) notched the 40th victory and 30th knockout of her storied career as she dominated three-division champion Bermudez (29-3-3, 10 KOs) over the course of nine exciting rounds of their scheduled 10-round main event. Just miles from her birthplace of Carolina, P.R., Serrano, 32, returned to the island for the fourth time in her career to defend her featherweight titles against the hard-charging, current two-division belt holder who was relentless in pressuring Serrano to no avail.

“I mean, this is boxing. I am not invisible, I get hit,” said Serrano who lives and trains out of Brooklyn, N.Y. “I knew I was a lot bigger than her. I was listening to my corner to box and I wanted to put on a show in front of my island and that’s what I did. The knockout came in the ninth which shows that I have power until the very end.”

Bermudez, 31, had some success early in the fight but as the fight progressed, Serrano displayed a significant speed advantage and boxed beautifully with flush counterpunching and creative combinations. As she flashed many facets of her arsenal, it was ultimately the dedication to the body that earned her the victory. In the ninth round, a right hook to the body forced Bermudez to take a delayed knee, the first knockdown suffered in her career and one that she was unable to recover from in time to beat the count. The ninth round marked the latest stoppage victory of the nine-time world champion’s career and the 12th time she has handed an opponent their first knockout loss. The stoppage came at 1:33 of the penultimate round.

“We knew she was tough,” added Serrano. “She’s a Latina. She’s from Argentina and we knew that Argentinians are very tough women. We were ready for it. I was ready for a ten-round war. It just happened; the body shot, so I might have to change my nickname to The Body Snatcher!”

Following Serrano’s impressive win in the Ring City USA main event on NBC Sports Network, the WBO and WBC featherweight champion set her sights on the other two champions in the 126-pound division as she eyes becoming Puerto Rico’s first undisputed world champion.

In the co-main event on NBC Sports Network, Mexico’s Eduardo ‘Lalo El Gemelo’ Baez (19-1-2, 6 KOs) handed Abimael ‘Manos de Piedra’ Ortiz (8-1-1, 4 KOs) his first professional loss in an all-action affair to kick off the main card on NBC Sports Network. Over eight rounds in the super bantamweight division, the fighters went toe-to-toe in the middle of the ring and exchanged punches at an impressive rate but it was the 25-year-old Baez who out landed the Cidra, Puerto Rico native en route to a wide unanimous decision victory. One ringside judge saw every round for the Mexican, who now calls Calexico, Calif. home, while the other two judges saw it 79-73.

Ortiz, 24, closed the fight well, landing arguably the biggest punches of the fight by either fighter in the final frame. The valiant effort by the hometown fighter was enough to earn the round on two scorecards but it was Baez’s conditioning that ultimately made the difference as the back-and-forth fight pressed on and the Mexican seemed to get more active.

“Abimael is very strong physically and has power,” added Baez. “But I listened to my corner and have good physical condition and that was the key to win.”

Trained by Marcos Caballero, the twin Baez brothers trained for their fights on NBCSN with four-division world champion Roman “Chocolatito” Gonzalez, who earlier this week spoke extensively about the focus on conditioning.

“I wanted to show them that conditioning inside of the ring is key so I would throw a lot of punch combinations during sparring so that they would be used to that high intensity interval training in the ring,” said Chocolatito in a Ring City USA event earlier this week. “They always push forward in the ring and have great conditioning so that is a great factor.”

Immediately before the main event, Carlos ‘Purin’ Caraballo (14-0-0, 14 KOs) of Ponce, P.R. made an emphatic statement with his fourth-round technical knockout victory over a game Leonardo ‘Leon’ Baez (18-3-0, 9 KOs) of Mexicali, Mexico. Caraballo, 25, sent Baez to the canvas with a vicious series of three consecutive left hands in the second round. Despite the knockdown, the Mexican-native continued to pressure Caraballo in the third and fourth rounds but was met with thunderous left hands until the corner threw in the towel and referee Roberto Ramirez called a halt to the action simultaneously at 2:36 of the midway point of their scheduled eight round super bantamweight scrap.

“I want to thank God, Ring City USA and NBC Sports Network for this opportunity,” said Caraballo. “What we did was worked that uppercut, we knew he was a big, strong guy. I knew I had to work that body and sooner or later the uppercut would come. When it did, we finished the fight.”

Continuously the aggressor until he was stopped, Baez absorbed countless body shots in the fourth round as the Puerto Rican prospect unloaded brutal uppercuts to the midsection. The southpaw continued his 100% knockout percentage as he took another step toward becoming a contender, but in the process believes that he solidified his position as Puerto Rico’s top talent.

“I am 100% sure that I am the most distinguished prospect on the island,” boasted Caraballo. “My goal was to go in there and get a couple rounds in, and I got it done.”

Earlier in the evening, in the main event live on Twitch in the U.S. and around the world, Juan Carlos ‘El Indio’ Camacho (11-1, 6 KOs) of Juana Diaz, P.R., emerged with a split decision victory over Marvin Solano (23-5, 8 KOs) in an eight-round bantamweight bout.

The executive producers of tonight’s presentation of Ring City USA: Serrano vs. Bermudez on NBC Sports Network were Eric Weinberger, Jeff Huggins & Frank Samuel. The telecast was produced by David Gibson and directed by Matt Celli.

Tonight’s full three-fight telecast will be available to watch on-demand on the NBC Sports App with authenticated sign-in.