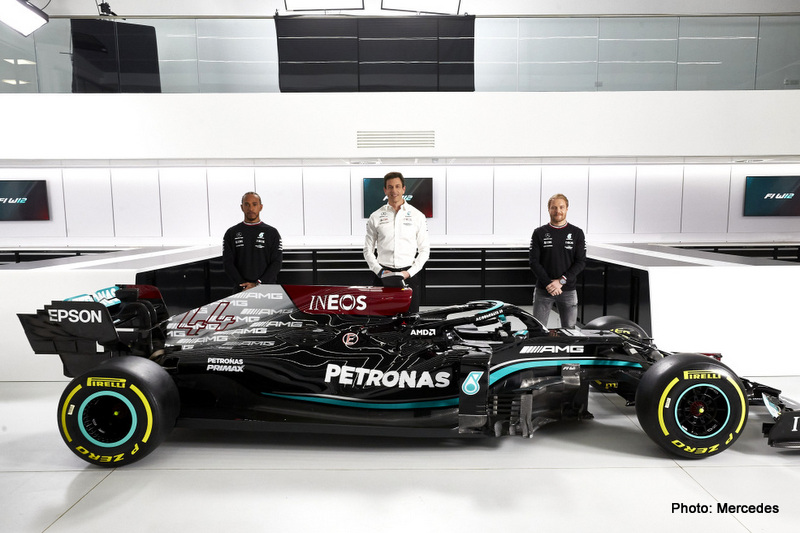 Lewis Hamilton can become the first person to win an eighth Formula 1 world championship in 2021, but the 36-year-old has said that whether he achieves that milestone will not determine his retirement plans.

The British racer signed a new contract with Mercedes over the off-season, which keeps him at the team until the end of the 2021 campaign, but at this stage Hamilton appears undecided about the next steps beyond that.

Speaking at the launch of the Mercedes W12 E Performance on Tuesday, Hamilton tackled topics including his future in F1, continued efforts to fight racism and ambitions away from the sport.

What’s driving you this year and where is your heat at the moment on whether you want to continue past 2021?

Hamilton: “Well, I’m fully invested in this season and in delivering. I still love what I do. I think, going back to earlier on, I’m just generally in a fortunate position that I don’t have to commit to multiple years. So, I chose to have a one-year deal so that I could see how the year goes and where we’re at mid-year or towards the end of the year – who knows whether we’ll still be in a pandemic. But it doesn’t mean I’m not committed, I’m still very committed to the sport. What I’m really focused on is trying to make sure that. last year you all wrote some really great reports, I think there was a lot of great discussion around this diversity issue and it still remains an issue to this day and it’s not going to change overnight. But what’s really important is to make sure we’re actually delivering and actually taking action. And I’m really proud of my team here, who I’m already seeing steps that we started taking last year, particularly towards the end of last year. We’re starting to see that progress little by little, and it just takes one step at a time of course. So, that’s kind of my driving force this year too. To make sure that we continue to push for accountability and on top of that hopefully I can deliver some good performances.”

We are entering another year of the pandemic which is impacting everyone’s lives. You have had the unfortunate experience of missing a race due to the virus, so will you be changing your approach to make sure there’s no repeat?

Hamilton: “That’s not really been discussed. And I don’t really know what I could, what I will be doing differently. Of course, safety is going to be key and of course I do not want to miss a single race this year. I think we did 99% of the time or 99.8% whatever it was last year was pretty spot on in terms of how we conducted ourselves and we were just really unlucky. It’s difficult to be 100% safe, as you know. But it will be, I would imagine, reduced travelling, a lot of time at home in a small bubble, like everyone else is working on. That’s kind of it for now, but we’ll co-ordinate with the team what is the best way forwards.”

What does off-track success look like for you this year?

Hamilton: “It’s working on partnerships, collaborations – in the past, particularly at the beginning of last year – collaborations with Tommy Hilfiger, I’ve designed a clothes collection that I got to be fully hands on and really get to design everything with the team. So there was a lot of learning process for that. I got to push for it to be sustainable, for example, the last collection was 80% using sustainable materials, some of them were 100%. And so that’s for me when you get to the end of the year and you see the result of something that you’ve been working on, whilst alongside something else that you’re fully devoted too – that feels successful. That for example was unisex, it was open to everyone. Last year, I started off the year and I made a post – I didn’t know what the reaction would be, I wasn’t really expecting anything back – but I was really blown away to see the response. And then kind of the steps that were taken after. And now I’m back at my team and I see already change in the system and plans being made – and that for me is success in the background, where you are actually impacting people’s lives.”

Being asked about future at every Grand Prix with a one-year deal – how will you stop that becoming a distraction?

Hamilton: “Time will tell, I guess. It’s not like it’s my first rodeo – I think I’ve been in this position where at least I’ve been asked the question for a period of time. Yeah, I don’t really feel pressured in that sense. Naturally, I continue to have huge belief in and always bet on myself – in terms of, I know what it takes to deliver. And I think I have an extraordinary relationship with Mercedes that’s incredibly deep and I think there’s more than just racing that we will probably end up doing together. As you’ve already seen, with this foundation, there is a lot of great things that we will do moving forwards.”

On track is there anything that has to happen for example if you won an eighth title would you step away or if you didn’t win would you stay on a bit longer to try and get it?

Hamilton: “That’s a good question. I think I have made a real important decision in my mind is that I don’t want that to be the deciding factor. I got into racing because I loved racing and I think that has got to be always at the core of what I do. If I don’t love racing and if all you are going for is accolades and world tiles I feel I could potentially lose my way. Of course it is the ultimate dream but I don’t think necessarily it will be the deciding factor for if I stay on and keep going. I think it is more when I put that helmet on I still have that smile when I leave the garage. It is going back to ‘do you enjoy it? Last year was a really tough year for everybody, including me, but there was still some impactful moments. Will that be the case this year we shall see. Will I enjoy it as much? We’ll see. I’m excited now so I’m sure I will.”

Wilfried Zaha said taking the knee has lost its meaning? Will you carry on doing this?

Hamilton: “Ultimately it is each to there own. Everyone has to make their own decision. I think that it is a symbolic gesture and at certain times it can be really impactful. I think we are entering into another year at the moment at the moment it has not been decided what we will do but we are all meeting when we get to Bahrain, so I’m sure that will be part of the discussion with Stefano for example. I don’t think it is the most important thing that everyone does and takes the knee I think it is more the action that we take in the background you know. It is true at the moment, what is really important is that things pass and things die down it is important that it continues to be an issue that affects my day to day life and so many people out there and I think it is really important to continue having that conversation. It goes back to accountability and continuing to hold uncomfortable conversations with people because change is possible and change is needed. We will see how we can collectively work together to make sure we are leading more in this sport and that doesn’t necessarily mean taking the knee.”

Relating to that you have said you want this year to be the year of action on diversity can you give us sense of what form that action will take? How important to you that your fellow drivers get involved in that?

Hamilton: “In terms of the other drivers I mean its down to them what they decide to do. I think you saw last year there was a mixture in some us taking the knee and some of us not, as opposed to some other sports where everyone is united together. But again it is down to choice and down to education I think is a part of it. What I would like to see is creating opportunity for people. What you saw in Austria for example with a young black girl on the podium for the first time in 70 years, that created an awareness in particularly young black girls and girls in general saw that it is a real possibility to become an engineer and sparking those reactions. For example Mercedes is now partnering with some schools in London and putting attention elsewhere and creating a bigger pool an opportunity to get into those STEM subjects. What I am not aware of is any other team doing that or acknowledging that, that is even an issue and those are thing that need to change this year. We can all do more.”

Which Spanish driver will be nearer Mercedes, Carlos or Fernando?

Hamilton: “I really don’t know. I think the Ferraris were obviously previously strong and if they can get their engines right, I hear they have a new engine, so maybe things will turn around for them. I don’t particularly have an opinion on either, I think it is great that they both have strong positions. It will be interesting to see how they will perform in terms of consistency and deliverables.”

Could it be a problem for Alonso at 39 years old?

Hamilton: “You will have to ask him that question. I’m not there yet so I don’t know what problems ones when you get to 39. I’m sure he is fine.”