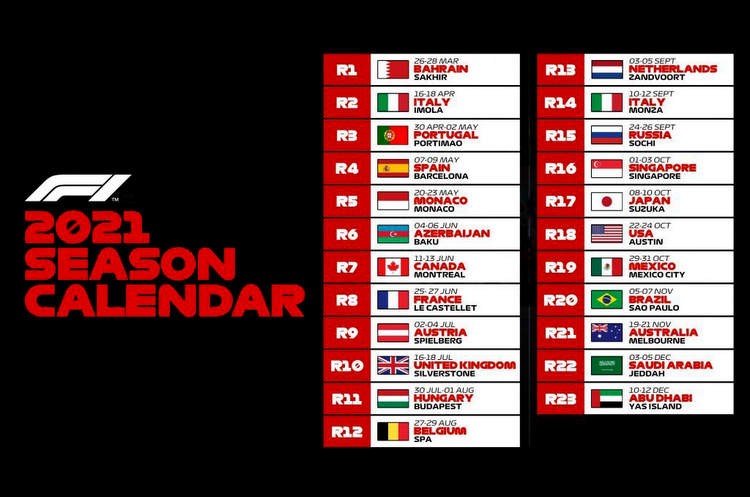 McLaren boss Zak Brown expects Formula 1 to lose a couple of races from this season’s record 23-round world championship calendar due to the COVID-19 pandemic but is confident there will be at least 20.

The championship starts in Bahrain this weekend instead of Melbourne in Australia, the usual opening race which has now been moved to November to allow more time for travel restrictions to ease.

Last season did not start until July, with an opener in Austria and 17 races in total confined to Europe and the Middle East.

“The sport did an awesome job getting 17 races in half a year. I think it’s great that we’re starting in March as we should be,” Brown told reporters on a video call on Friday. “So I’m confident we’re going to be racing March through December.

“I think we will lose a race or two. Not long ago the calendar was 15-16-17-18 races so I think if we can get in 20 races over a normal calendar season that is a very complete Formula 1 schedule.

“We’re just going to have to see how things and vaccines roll out over the course of the year to see which countries may or may not be impacted. I’m confident we’ll get in at least 20 races.”

Italy’s Imola circuit hosts the next race after Bahrain, on April 18.

“Talking to Stefano and Ross, they’re very confident and their confidence comes from talking to all their promoters that all the races will happen,” he revealed.

The Monaco and Baku street circuits, which both cancelled last year, are being readied and Formula One has proven its COVID-19 protocols are robust and effective.

Brundle said, however, he still found it hard to believe Formula One would travel to COVID hotspots Mexico and Brazil, or have easy access to Australia, in the current circumstances.

“Sitting here right now that feels challenging and the back-ups will be Nuerburgring and Istanbul. If we get 23 away I’ll be staggered,” he added.

Leclerc: I don’t understand drivers trying to have excuses

Massa: I don’t know if Alonso gains being with Aston Martin