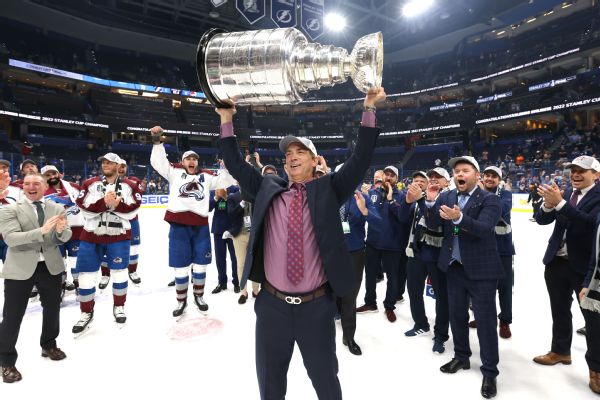 The Colorado Avalanche are reshuffling their front office after winning the Stanley Cup.

Executive vice president/general manager Joe Sakic has been named the team’s president of hockey operations, clearing the way for assistant GM Chris MacFarland to take over as the fifth general manager in Colorado team history.

Sakic took over as general manager in September 2014. The Hockey Hall of Famer and former Avalanche star center oversaw a rebuild during which Colorado drafted defenseman Cale Makar and right wing Mikko Rantanen while making bold trades for players such as center Nazem Kadri and defenseman Devon Toews. The Avalanche made the playoffs for four straight seasons before breaking through with their 2022 Stanley Cup championship win over the Tampa Bay Lightning.

Sakic was named the 2021-22 recipient of the Jim Gregory General Manager of the Year Award at last week’s NHL draft in Montreal.

“Joe is awesome. I think sometimes in pro sports, it’s going to go through some of the cycles. The hardest thing is to stay good all the time,” Avalanche owner Stan Kroenke said after winning the Cup in Tampa, Florida, last month.

The move upstairs keeps MacFarland with the Avalanche. The 52-year-old was pursued by several teams seeking to hire general managers over the past few seasons, with the Avalanche refusing to grant permission for him to interview for jobs such as the opening in San Jose.

MacFarland was a member of the Columbus Blue Jackets‘ hockey operations department for 16 years. He assisted Sakic in all hockey-related matters and was credited with having helped create the Avalanche team that hoisted the Cup, having joined the team under Sakic in May 2015.

MacFarland will get right to work: Colorado has only 16 players under contract for next season, including eight forwards. Plus, talks are expected to intensify with superstar Nathan MacKinnon, who is one year away from unrestricted free agency.