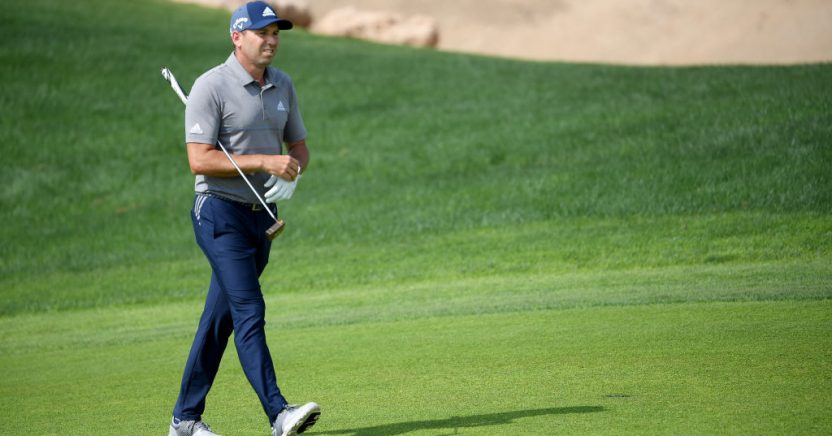 Sergio Garcia eagled the 9th hole at TPC Sawgrass to take a two-shot after the first round of the PGA Tour’s Players Championship.

Starting his round on the 10th hole, the Spaniard, who won the tournament in 2008, made a birdie at the 15th and an eagle at the 16th, before charging to the top of the leaderboard with birdies at 2, 7 and 8 and then a stunning eagle at the 9th to complete a superb seven-under-par 65.

“I’ve always said it, Valderrama and this course are some of my top favourite ones and for some reason it just kind of fits my eye,” Garcia said. “I see what I want to do pretty much every hole and then it’s a matter of doing it, but definitely I feel more comfortable and I’ve done well here. So all those things help.”

Garcia is two clear of American Brian Harman, while Shane Lowry and Matt Fitzpatrick are tied for third on four under, after a pair of 68s, while last week’s winner and runner-up, Bryson DeChambeau and Lee Westwood respectively, are in a group one shot back after opening 69s.

There was less good fortune for last year’s Players Championship winner Rory McIlroy. The Northern Irishman, who was playing alongside Garcia, all but ended his chances of winning this week after carding an error-strewn 79.

Most of the damage was done on the 18th hole – his ninth – where he racked up a quadruple-bogey eight after finding the water twice off the tee, but he made an awful start when he hooked his drive on the 10th into the undergrowth and had to take a penalty drop on his way to a double-bogey six.

The four-time major champion also three-putted the par-three 13th. A birdie from nine feet on the first hole saw him begin to repair some of the damage, and he made another on the second, despite again hitting a poor drive, but bogeys on the next two holes dropped him back to seven over. He clawed one shot back at the fifth, but another three-putt on the ninth saw him sign for a 79, equalling the highest opening round of a defending champion set by Sandy Lyle in 1988.

The water surrounding Sawgrass’s famed island green 17th claimed 35 balls on Thursday – the single round record is 50 – before darkness ended play with several players still out on the course. South Korea’s An Byeong-hun, racked up the biggest score of the day, hitting four balls in the water on the way to an octuple-bogey 11 – one shot lower than Bob Tway’s record 12 in 2005.