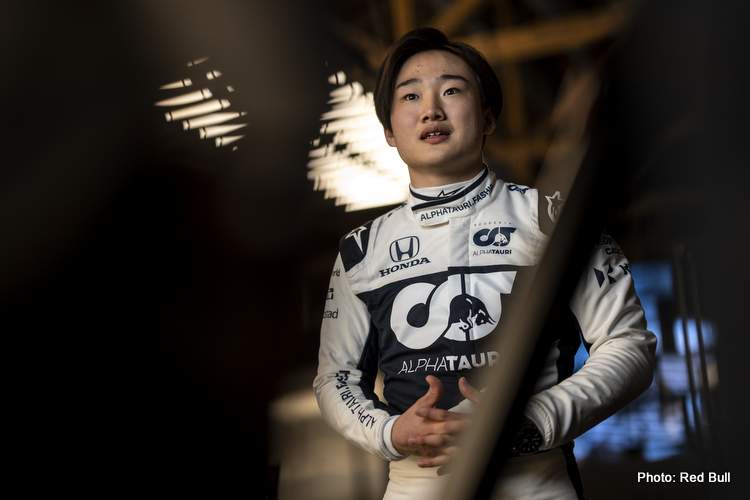 Alpha Tauri rookie Yuki Tsunoda will be Japan’s first Formula 1 driver since Kamui Kobayashi stepped out of the cockpit of a Caterham at the end of the 2014 Abu Dhabi Grand Prix.

Hopes are high that Red Bull have found a gem of a driver, but only time will tell if the country’s 24th F1 driver will become a race winner, something that has eluded his compatriots, who have amassed just three podiums between them.

Having finished third in last year’s F2 standings and with a handy amount of mileage in a two-year-old F1 car under his belt, Tsunoda is not only there on merit but also has been well-prepared for the challenge ahead of him.

On the occasion of the AlphaTauri AT02 car launch last week, the team released the following Q&A with the 20-year-old, who will be the youngest driver on the grid in 2021.

Did you expect to make the step up to F1 after just one year in F2?

Yuki Tsunoda: “No, not really!! To reach Formula 1 – which was my final goal as a driver – you don’t just have to deliver results, you also need some luck, and this is something you can’t control. So, from my side, I knew I always had to give my best at all times. It was in my hands to stand out and impress the bosses, who can make your dream come true. In every series, you need to develop a strong pace very quickly, so I was committed to doing well right from the start of my career. It was good to show what I could achieve in my inaugural year in F2 and I’m so happy to have graduated to F1 so quickly.”

Do you think F2 prepared you enough for this step to F1?

Tsunoda: “For certain aspects, yes, because I’ve managed to experience many of the tracks, and I’ve also learnt a lot about tyre management. F2 gives you a good understanding of working with a racing team at this high level and I’m excited to continue this development at Scuderia AlphaTauri. There’s always more to learn, but F2 was a very useful experience and a good warm-up before starting my next adventure in F1.”

What do you expect will be the biggest differences to F2?

Tsunoda: “The speed of the cars, of course, is a huge difference but also the fact that the season is much longer. On a technical side, there are many differences and it’s quite a big step up. There are a lot of complex procedures, which I will need to learn as quickly as possible, and the team is so much larger that there are a lot more engineers to report to. In addition, it will also be necessary for me to remain well trained and strong, both physically and mentally, to cover 23 races with minimal down time – this will also be a big difference from F2.”

Tsunoda: “It’s a very friendly team and I’m confident I can work well with them. I like their passion and how they prepare for events. It’s been a good relationship from the beginning, so it should only improve as we get to learn more about each other through the season. I’ve been lucky enough to spend some time with Scuderia AlphaTauri ahead of the season so I’m already learning a lot from them and continuing to develop strong relationships with the whole team.”

How excited are you for your first season in F1?

Tsunoda: “I’m really excited to get started and am particularly looking forward to racing in Suzuka, in front of the Japanese fans. The last time I raced in Suzuka was in Formula 4 – so it will be a big difference – but I’m really excited to now get the opportunity to represent my country in F1. I am also looking forward to visiting many new countries and racing on different tracks. If I had to pick one of the circuits I’m most looking forward to, apart from Japan, it would be Monaco – there is so much history there and it’s a very challenging circuit. The biggest thing for me though, will be lining up on the grid with so many superstars of the sport – it’s an absolute honour to be competing against some of the greatest drivers in the world.”

Why did you chose “22” as your racing number?

Tsunoda: “My number when I was racing in karting was 11, but in F1 that’s already taken by Sergio Perez. So, I doubled it to become 22, which I also liked because it was the number of Jenson Button – a driver I respect a lot – when he won the Formula 1 World Championship in 2009. It’s also a number used by Japanese driver Takuma Sato.”

What motivates you to drive faster?

Tsunoda: “I just want to beat the other drivers and I also want to be the first Japanese driver to win a race in Formula 1.”

You’ve been supported by Honda for a long time. How important is your relationship with them and what do you expect from them this season?

Tsunoda: “Honda have supported me since I was in Formula 4 and have played an incredibly important role in my career. I will never stop saying thank you to them and I will try to show my appreciation to them through my driving, by delivering the best possible results this season. For them it is their last year in F1, which is a real pity, but I think it will be a good year for them with improved engine power. My main goal this season is to do well, for the team, for myself and certainly for Honda.”

What do you think you can learn from your teammate Pierre in your first season in F1?

Tsunoda: “Pierre is really fast and already has a win under his belt in F1. The first target for every driver is to beat your team-mate but he will be a hard one to beat. I remember seeing him in Japan when he was racing in Super Formula and I was in Formula 4. He nearly got the title in his first year in Japan which is really difficult, especially for a European driver. He’s an incredible talent and I’m excited to learn everything I can from him this season, as I’ve already seen how integrated he is within the team.”

You will be the youngest driver on the 2021 grid. What are your feelings about that?

Tsunoda: “I don’t think it’s worth putting too much emphasis on age – as Max Verstappen was 17 when he started – but I feel it’s an honour to be the first driver on the grid to be born in 2000.”

Who is Yuki Tsunoda away from the race track?

Tsunoda: “I’m just a normal 20-year-old boy. I like gaming – when I’m not racing, I’m gaming with my friends in Japan. I like shooting games – such as Apex Legends and Call of Duty – and sometimes when I’m playing them, I imagine shooting at someone I hate…it works well, it boosts me! Also, I like being outdoors doing things like wakeboarding and snowboarding – there is a place in Milton Keynes where you can do indoor snowboarding. I like to do physical things in general. I find that sport and gaming help me to reset my mind and I feel refreshed afterwards. However, I don’t really like racing games as I don’t find them realistic.”

What are your goals for your first season in F1?

Tsunoda: “My main goal for this season is to learn quickly and deliver results as soon as possible. I must always do the best I can and then we will see how the season plays out.”