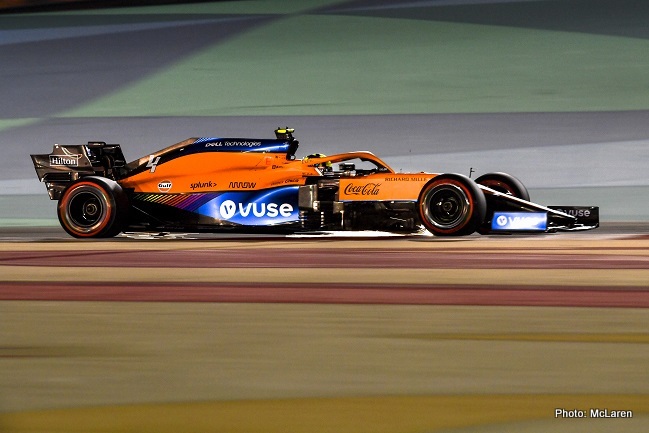 Lando Norris was keen not to get carried away after an excellent day in Bahrain where the 21-year-old finished second fastest in both free practice sessions.

Norris finished the first Friday of the 2021 Formula 1 season with a fastest lap time of 1.30.942, a feat bettered only by Max Verstappen.

The showing was very positive news for McLaren, who are still adapting to their new Mercedes power-unit.

However, Norris was diplomatic when reflecting on the day following the conclusion of FP2.

“We look quick today, but I think it’s fairly obvious what’s going to happen tomorrow,” he said. “It’s going to be the usual front four cars ahead of us.

“Behind, everything’s very close. Even if today we are a little bit ahead, I think it’s because we just showed a bit more. We’ll go in tomorrow and be a little bit more where we should be.

“I feel good in the car, the car does feel good in some areas. In some areas also it doesn’t feel that good and we need to improve, and if we can improve it tomorrow, then I’ll be happier.”

In terms of his adaptation to the MCL35M, Norris admitted that he was not yet entirely comfortable.

“I don’t have the confidence that I want, especially in the medium and high speed corners,” he added.

“So corners like turn six, seven. I made a mistake there on my first lap and I had to abort because I turned in and just complete lost the rear.”

Andretti: Herta will do well in Formula 1, his future is bright