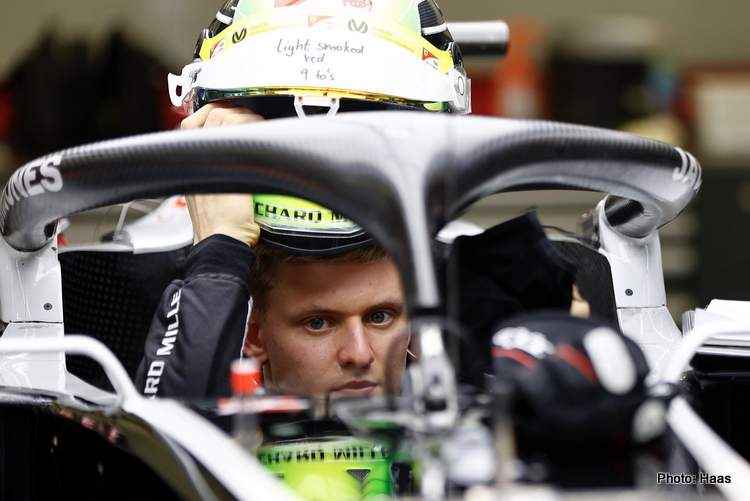 Mick Schumacher will take part in pre-season testing at the Bahrain International Circuit this week ahead of his maiden Formula 1 campaign.

After winning the F2 title at the second time of asking in 2020, the young German will make his debut in F1 with Haas, with the US-owned team hoping to bounce back after two difficult campaigns.

Schumacher will commence testing on the morning of Friday, March 12, with his teammate Nikita Mazepin behind the wheel in the afternoon. The pair will continue to run half a day each – alternating sessions throughout the remaining two days of the test at the 5.412km, 15-turn track – home of the season opening Bahrain Grand Prix on Sunday, March 28.

Looking ahead to the weekend, Schumacher shared his thoughts with the team.

Walking into the paddock in Bahrain as one of the 20 drivers competing in Formula 1 this season – it’s obviously the realization of a dream and a significant moment in your career, but is it something you’ve visualized in the past or do you keep those emotions firmly in check and take it one day at a time?

Schumacher: “Obviously now being one of the 20 drivers in Formula 1 is very special. As a child, I’ve been dreaming about this for 15 years – and now it’s actually happened. It’s emotional and just something very nice. My father actually had his first race in Formula 1 30 years ago this year – that makes it even more emotional and even nicer.”

With just a day and a half of testing scheduled for you in the VF-21 – what are your immediate priorities in terms of what you can extract from the test?

Schumacher: “The definite priority is to get even more comfortable in the car and just trying to sort out everything that needs to be sorted out from driver kit, the seat, driver position, through to how the car feels on track and working with the team. These are all focus points I set myself some time ago. And now we’re at the point we’re going testing it’ll be the case we can work on that. I’m looking forward to that and figuring out everything we need to be ready for the first race.”

What are your thoughts on Bahrain International Circuit as a test venue? What stands out with regards to the characteristics of the track and how much of the test focus will be looking ahead to the Bahrain Grand Prix?

Schumacher: “It gives the teams a lot of information naturally if you’re testing at a track then you race there a week later. It’s like an extended weekend where we have extra mileage. It’ll give us the opportunity to drive on a circuit that has high degradation, the track is very abrasive, so we have to look after our tires. Also, in this case, it will allow us to learn more about where the drop-off point in the tire is. Coming from Formula 2 we have very little experience on the Formula 1 tire. But we do have a good amount of experience with Pirelli tires, so that’s really going to be one of our focus points. We need to get even more information on how to prepare a single lap and also how to prepare the tire for race distances. The races this year are very much longer than the ones we had in Formula 2 and obviously now we only have one race each weekend. We have to be able to extract as much knowledge from the free practice sessions and qualifying to be able then to put everything into the performance for the race.”

Having tested with the team in Abu Dhabi, has that helped accelerate your relationships within the team – something that’s undoubtedly been harder due to travel restrictions etc over the winter. What specifically have you been able to work on with the team remotely ahead of Bahrain?

Schumacher: “It was great to have had that weekend together in Abu Dhabi in general. It wasn’t just about the track time it was the benefit of spending a full weekend with the team. Having had my seat fit earlier in Bahrain that also gave me first contact with the team on a personal basis – which was great. I received a warm welcome which always gives you a good feeling as a new driver coming into a team. Over winter it was a bit difficult for me to travel with the restrictions. I’m a driver that loves to spend time with his team, so it’s been hard, it hasn’t felt right. But thankfully I was able to get to England and do things like my seat fit. Regardless, we’ve had online meetings, a good alternative given the circumstances we found ourselves in. We’ve had check lists and we’ve gone through all the points we had to. I really do feel like I’m 100 percent prepared.”

With a longer calendar and longer races than you’ve faced before in F2 and F3 – what elements of your conditioning program have you focused on ahead of your Formula 1 debut? Did you allow yourself any rest after your winning F2 campaign or did you focus immediately on preparations for Formula 1 – knowing there’s a physically more intense season ahead?

Schumacher: “I really wanted to give myself a week off of training but I didn’t manage. I took one day off, I was bored, so I just went back into the gym and started training. My focus points were my neck muscles, they’re under the most duress for the duration we’re in the car. That was one of the everyday training elements I did and still do. I feel I’m very much prepared on that side. It’s the same on the physical side obviously. That’s been a bit different – obviously, I now have power steering which will be a lot more comfortable to get the car around the corners. You still have to prepare your body for the g-forces we’ll encounter in the races. Even after being out of the car for a week, your body then has to readapt once you go driving again. I’ve also been trying new things. I went cross-country skiing which was very fun. I got to train with some great people who showed me all the right techniques – which is everything in that sport. It was just good to learn how to do new things, it helps you adapt to different things, this is why I try every year to do something new.”