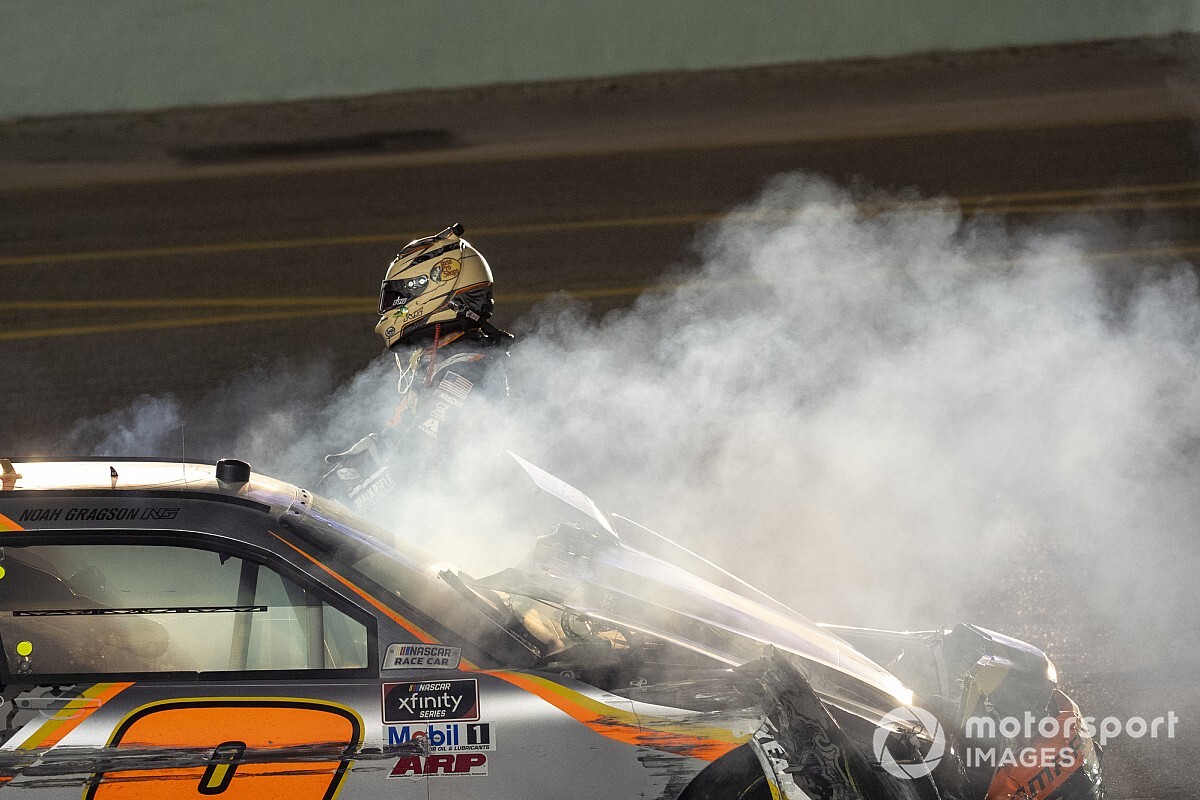 The two-time NASCAR Cup Series champion has been at the center of controversy many times throughout his impressive career.

Gragson is no stranger to confrontation. His latest incident at Atlanta Motor Speedway started with contact on pit road and ended with a fist fight after the checkered flag.

The 22-year-old seems very comfortable in the spotlight and seems to feed off the controversy, reflected in his aggressive driving style.

He also faced criticism after to comments he made following a late-race incident with slower traffic at Homestead that cost him the race victory. Gragson did not back down and later said, “the most important thing for me is to stay true to myself.”

Kyle ‘Rowdy’ Busch is no stranger to this position and the Cup Series veteran offered his thoughts on Gragson earlier this week.

“Noah is a fiery guy. He’s had his personality out there for a long time, and he’s always been a fun, easy going type of guy that likes to have a good time but does focus on his work and tries really hard at his work. I don’t think he’s any different than any other race car driver. They want to win. They want to be their best each and every week.”

Speaking of the Atlanta situation specifically, he added: “I’m just not sure that he knew the exact situation that was happening on pit road, because certainly my visual coming down pit road is that I focus on my pit sign and that’s where I’m trying to go to get into my pit box. When the 18 (Daniel Hemric) was turning into his pit box, there was another car there. I don’t know if Noah saw the full picture of all of that, and just assumed that the 18 was messing with him. Sometimes you’ve got to take things with a grain of salt, go back and watch the film and talk to a guy, but right then and there in that instance, he backed up, backed up too far, whatever, and made a situation happen out of something that didn’t need to be one.

“I think that all of us our guilty of that. I’m guilty of that. I’ve probably seen things from inside the race car that weren’t exactly what they looked like on TV, so it’s a matter of growth. He’s been into with it with a few of the drivers out there, fortunately, he and I haven’t had any issues. I think it’s kind of the driver etiquette, driver code. You race those how you expect to get raced, and when that changes, the dynamic between those two drivers changes.”

Gragson has feuded with multiple drivers in his Xfinity Series career, and Hemric is not the first driver he has fought either. Just last year, he and Harrison Burton came to blows after coming together on track at Kentucky.

Busch offered some advice for the young racer who has no intentions of backing down, warning that “it’s a slippery slope.”

“You certainly want to be careful,” Busch continued. “There’re ways you can climb your way to the top of that mountain, but if you slip too big, you are going to have an avalanche down. Just be careful in the ways that you do it and what you do. I don’t think he’s done anything wrong per say, it’s just a matter of building that persona and how much of that persona do you build.

“The biggest thing for me if I were giving advice to Noah (Gragson) is you need to put a little more focus on you, yourself, your team and less on everybody else and go out there and win races. He was super-fast at Homestead, highly impressive with what he was doing there, and he should have won that race, but ultimately, it didn’t happen. There are hundreds of YouTube videos out there of Kyle Busch after a race which he dominated and didn’t win where he’s pissed off afterwards, so I’m guilty of it too. It’s a racing incident. It’s stuff that happens. I’ve grown to understand a little more of that as I’ve gotten older, so I’m sure he will too.”