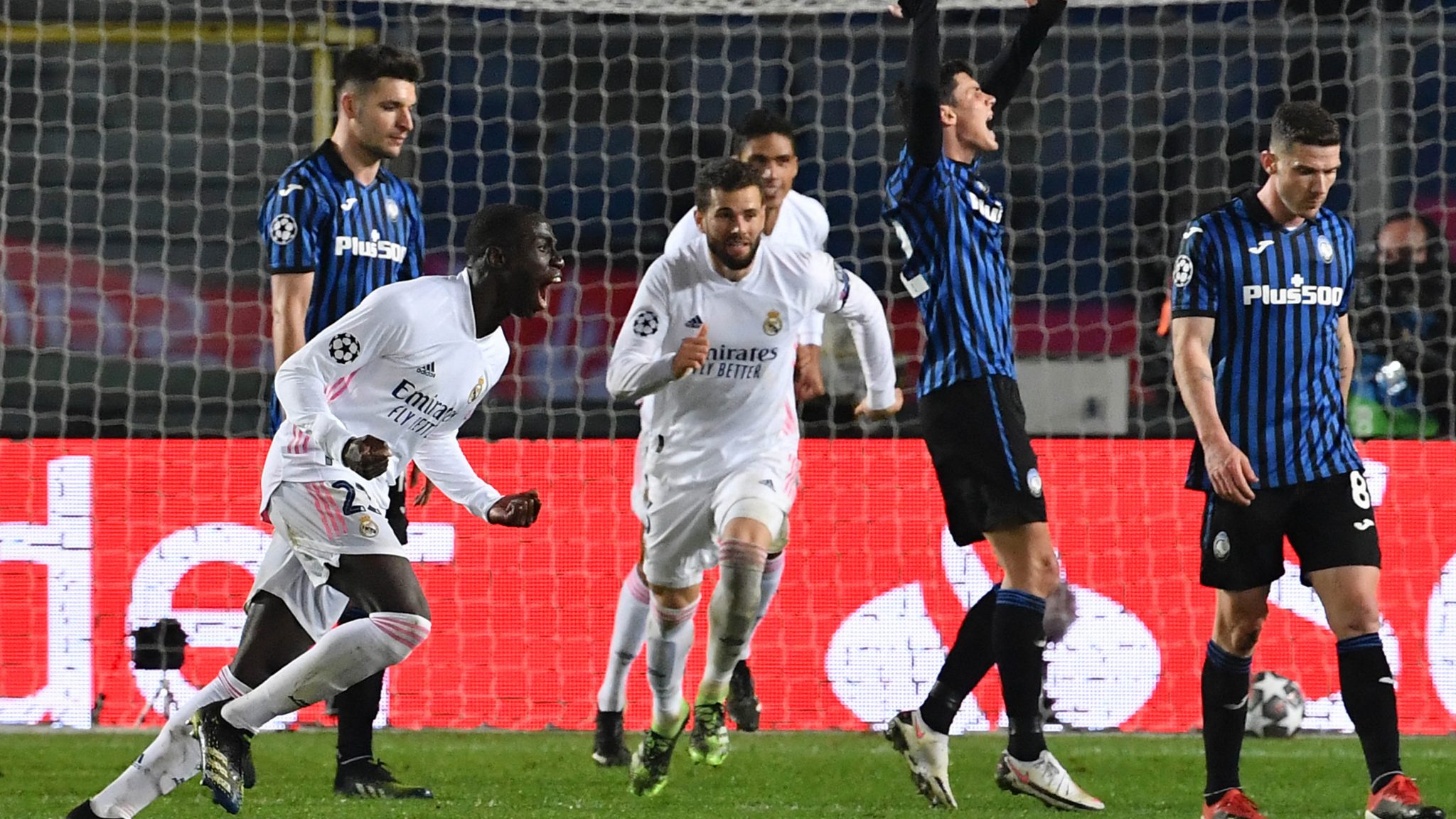 Ferland Mendy put Real Madrid within touching distance of the Champions League quarter-finals on Wednesday with the late strike that sank 10-man Atalanta 1-0 in Bergamo.

The French left-back’s curling effort came four minutes from time in a last 16, first leg clash in which the hosts had to play a man down for over 70 minutes, giving Zinedine Zidane’s side the advantage heading into the second leg in Madrid on March 16.

“We didn’t have a great game tonight, but the most important thing was the result, scoring away was important for us,” said Zidane.

“It’s a very good result against an Atalanta team even at ten, because they defended very well.

“The tie is open. We are going to have a great return match.”

Atalanta had attacked early but the game was transformed when Swiss midfielder Remo Freuler was harshly send off in the 17th minutes for tripping Mendy at the edge of the penalty area.

Gian Piero Gasperini’s woes continued with forward Duvan Zapata limping off after half an hour with a muscular problem with midfielder Mario Pasalic coming off the bench.

“The game was ruined,” said Gasperini.

“I just got banned for saying something in Serie A, if I say something now then UEFA will ban me. But this is football suicide.

“Enough of these referees who’ve never played a game and don’t know the difference between a challenge and a foul.”

Spanish midfielder Isco got a rare start up front for injury-hit Real Madrid playing alongside Marco Asensio and Vinicius.

The 13-time European champions were without striker Karim Benzema due to an ankle problem with an injury list also including Sergio Ramos, Eden Hazard and Dani Carvajal.

“It’s true that there are many casualties, but the players who are here are doing well, committed, every time there is a change we adapt,” added Zidane.

But Zidane’s side failed to truly make the most of the extra man despite coming closest to breaking through in the first half with a Casemiro header, with Nacho, Isco and Vinícius Junior also threatening and Luka Modric firing over.

Atalanta continued to attack, with Luis Muriel missing a chance to give the hosts the lead four minutes before the break with a long-range strike that went just wide.

Atalanta goalkeeper Pierluigi Gollini then kept the scores level when he stopped a Casemiro header on a free kick before the half-time whistle.

Josip Ilicic came on in place of Muriel after 56 minutes.

The Slovenian scored five goals against Valencia at this stage of the competition last season, but was substituted four minutes from time after a poor display.

Soon afterwards Madrid broke through thanks to Mendy, who beat Gollini with a stylish, curling effort into the top corner.

Madrid have the advantage going into the second leg having missed out on the quarter-finals for the last two seasons.

“Normally there are a lot of goals in games against Atalanta, we were expecting a difficult game but after the red it was normal they would defend deep,” said Real goalkeeper Thibaut Courtois.

Atalanta need a historic effort in the away leg to reach the last eight for a second successive year.

The Bergamo side won their last 16, first leg clash against Valencia 4-1 a year ago in front of 45,000 spectators in Milan’s San Siro.

That match was considered to have been one of the reasons behind the acceleration of coronavirus in Italy with Bergamo at the epicentre of the country’s outbreak.

The are in their second Champions League campaign, but Wednesday’s match was the first knock-out fixture in their home stadium which underwent renovations last season.

And thousands of fans ignored the Italian team’s plea to stay away with a party atmosphere outside the stadium with a fireworks display.