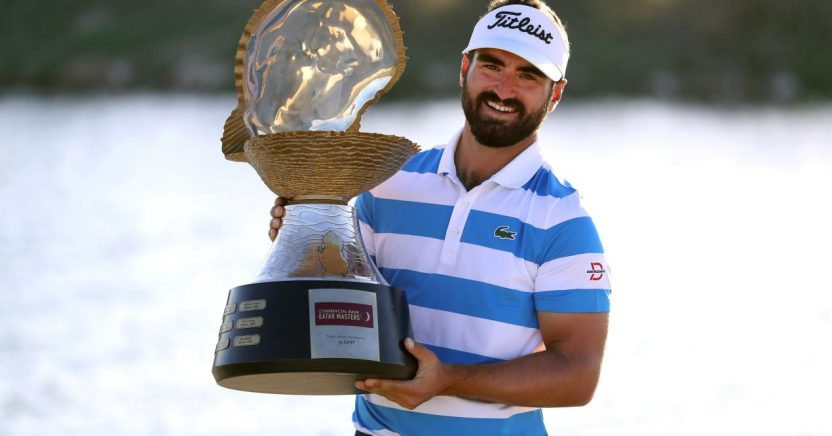 Frenchman Antoine Rozner holed a 60-foot putt on the final hole to win the Qatar Masters by a single shot.

Rozner started the final 18 holes at Education City Golf Club in Dohar three shots off the lead, but he hit the top of the leaderboard after playing the front nine in just 33 strokes. But he was joined at the top by Guido Migliozzi (65), Gaganjeet Bhullar (69) and Darren Fichardt (71), leaving the Frenchman needing a birdie at the last to secure the victory.

The 28-year-old left himself a long way from the pin on the last, and it looked like he wold need two putts just to make a play-off, but he drained an incredible double breaker over the ridge from fully 60 feet to sign for a 67 and take the title with an eight-under-par total.

Rozner’s victory is his second in his last six events and comes just three months after his maiden win at the Golf in Dubai Championship. It means he has two wins in 29 events – making him the fastest French player ever to two victories – with just four missed cuts in an incredible start to his European Tour career since graduating from the Challenge Tour in 2019. That 2019 campaign brought him back-to-back wins on the Challenge Tour, and he will now move into the top 70 in the world

Rozner, whose victory took him firmly into the Ryder Cup picture, said: “Even in my biggest dreams, I couldn’t imagine anything like this happening. I don’t really know what to say, it’s probably the biggest moment of my career. I think my caddie Darren knew what was going on and he was just telling me to keep doing what I was doing, because I was asking for scores, and he wouldn’t tell me. He said ‘stay patient’. It was a bit frustrating not to hole many putts on the back nine, but I guess it was a good way to wait for 18.”

He added: “To become a two-time winner on the European Tour is a huge deal for me, so I am just going to enjoy the next few days as much as I can. We’re a long way off from the Ryder Cup, but it is definitely a goal of mine and it would be a dream come true to play in it.”