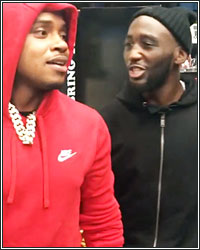 Every Thursday here at FightHype, I pull out my gigantic, bulbous, bulging sack and give truth-minded boxing fans a gander. This week, I shoot ropes of truth all over comments/questions related to the Spence-Crawford non-event and disrespect of the little guys.

Spence and Crawford Are Gonna Regret…

The biggest fight to not happen in the 1990’s was between Lennox Lewis and Riddick Bowe. They fought for the gold medal in the super heavyweight division at the 1988 Summer Olympics with Lewis stopping Bowe in the second round. It seemed destined for them to one day to cross paths inside the ring as professionals but that never happened.  The belt they would’ve fought for was the infamous WBC belt that Bowe had but instead of him defending the belt he threw it in the trash and it became known as the trash can belt!

Moving forward, I bring this up because we have the same thing happening again with two of our best welterweights not willing to fight each other. Spence offering Crawford 70/30 which is a insult and Crawford wanting 60/40 which don’t make sense due to his TWO poor PPV ratings! The two combined does not even equal to one of Spence PPV.  In a perfect world 50/50 would get the fight done and in the rematch the winner gets 60/40 but in boxing it’s about the numbers and Spence numbers definitely state he should get the lion’s share of 60/40.  This weekend Crawford was interviewed and he was quoted saying “I’m not even worried about Errol Spence anymore. I already told everybody that fight is history…I’m not thinking or worried about Errol Spence anymore. That fight is beyond me.”

Who really loses is the fans because we are being robbed of a fight we so badly like to witness‼️ I think these fellas need to sit down man to man and figure this thing out like Mayweather & Pacquiao did! If not…this will haunt them when they get old. They have given us too much teasing to not have this fight! So if y’all are reading this swallow y’all pride and make this thing happen!  Life is too short and you never know what’s around the corner.  There’s a shit ton of money to be made and also the bragging rights of whose the baddest man.  Remember when you were fighting for free and loved it…don’t end up like Lewis & Bowe regretting never fighting each other.  If MayPac could be done any fight can‼️‼️‼️

I’m with you. I think most of us fight fans are with you. The problem is that the boxing business people are not with you.

While Spence-Crawford is huge for us hardcore fans, it wouldn’t bring in the kind of revenue that Mayweather-Pacquiao did or even the kind of revenue Fury-Joshua would. In order to get the really good money, the fighters have to have some sort of crossover mainstream appeal and, because the business is what it is today, neither Spence nor Crawford are mainstream figures at all.

So, even if that fight titillates the base and converts them into buyers, there’s going to be a ceiling on just how much money can be generated. How many more dedicated boxing fans could pop up to buy Spence fighting Crawford who didn’t pop up to buy, for example, Spence vs. Shawn Porter?

Yeah, Spence and Crawford would make more money fighting each other than they could make fighting anyone else (except Manny Pacquiao), but not SO much more money that it would be worth risking their place at the top of the division and the existing paydays that come along with their spot. That’s why the fight hasn’t happened and probably won’t happen any time soon.

Boxing’s bad business model has made it increasingly difficult to create a true crossover star. So, the boxing businessmen are now just playing to the base, exclusively, putting content behind, sometimes, two or three paywalls. And that’s just siphoning away the high-end money from the potential blockbusters. According to industry insiders, sales to “casual” fans can constitute up to 70% or 80% of a big fight’s revenue. If the “casuals” don’t know enough or care enough about the fighters to make that impulse PPV buy, then the money won’t be there to compensate the combatants for the risk taken.

This is a problem that boxing made for itself. The perpetual cock-blocking of Spence-Crawford is just a symptom of a greater disease.

We can hope that pride gets the better of Spence and Crawford, pushing them forward to make the fight just to prove who the best is. Unfortunately, pride is probably one of the reasons they CAN’T make a deal. Neither wants to concede a thing to the other in negotiations.

And that just takes us full circle. They won’t concede in negotiations because they’re both quite comfortable in their current deals and they don’t HAVE to.

I read your Notes from the Boxing Underground column on Monday [Magno: Actually, it was the Monday before that– I’m one week late in posting this] and I think you’re being too disrespectful of Estrada and Chocolatito. You talked almost like that war they had didn’t matter at all. It’s guys like you in the media that treat the smaller weight classes as nothing. Some of the best boxing happens in those divisions and for people like you to disrespect them just shows that you aren’t a real boxing fan at all. These guys bleed for us. They deserve our respect.

I don’t think I “disrespected” anyone with my analysis. After complimenting both fighters and expressing how much I was entertained by the fight, I played the wet blanket and said this:

“While this fight had immense appeal to us hardcore fight fans, it meant absolutely nothing to the big picture of boxing health and well-being. This was the equivalent of an indy band showcase at a small club for an audience full of snobby music critics who already adore the band and/or are just incurable hipsters.

It’s important to play to the base and keep them satisfied with fights like Saturday’s, but it’s absolutely essential to get the blockbusters with potential crossover appeal signed, sealed, and delivered. As time goes by and the sport drifts further and further from the public’s eyesight, there will be fewer and fewer “blockbusters with potential crossover appeal.” And that’s bad news for all of boxing and even for the hardcore base as Estrada-Gonzalez classics will also be harder to put together due to shrinking budgets and disappearing platforms.”

And all of that is true. The numbers support it. One could argue that HBO Boxing died its final death playing to the boxing “purists” who said they wanted more lighter-weight battles and Euro-fighter fare.

That kind of stuff may play to the “purists”– and it’s dubious whether they even REALLY want that and/or respond to it as consumers– but it’s a zero factor to the vast majority of everyone else, deciding if they want to tune in for a night of boxing.

American fight fans will never have a taste for the smaller weight classes. It’s just not relatable and not part of the fight culture. That’s no insult to the fighters like Chocolatito or Estrada. It’s just an observation. The network boxing bossmen hopefully understand that a dozen budget super flyweight “epics” do not add up to one meaningful blockbuster at welterweight/middleweight/heavyweight when it comes to creating main stage buzz. Boxing needs the buzz and needs to do the hard work of getting those big fights made. It can’t just temporarily appease a vocal segment of the base with the occasional acquired-taste treat.

Got a question (or hate mail) for Magno’s Bulging Mail Sack? The best of the best gets included in the weekly mailbag segment right here at FightHype. Send your stuff here: paulmagno@theboxingtribune.com.