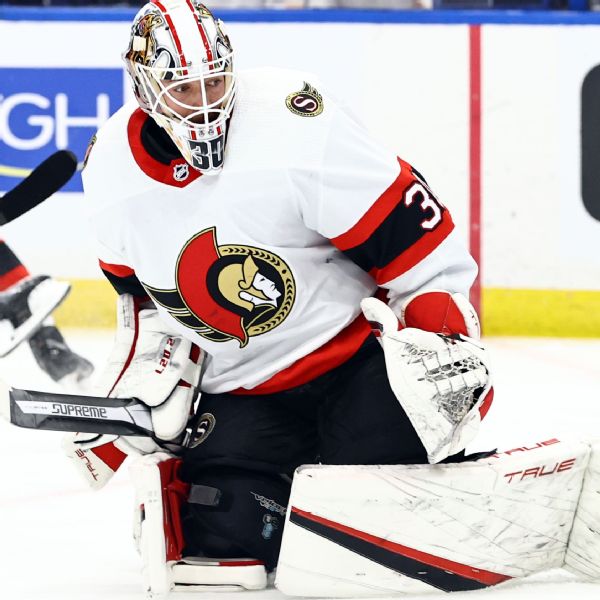 Ottawa will retain 25% of Murray’s salary as part of the trade. Murray has two years remaining on his contract at $6.25 million period, leaving Toronto on the hook for $4.7 million of Murray’s cap hit the next two years.

At present, Murray, 28, a two-time Stanley Cup champion with the Pittsburgh Penguins, projects to be the Maple Leafs’ starting netminder moving forward, as incumbent Jack Campbell is set to hit the open market this week. Toronto had failed to find middle ground with Campbell, the team’s No. 1 goaltender for the last season and a half. Campbell now joins Darcy Kuemper as the top unrestricted free-agent goaltender targets when the signing period officially opens at 12 p.m. ET Wednesday.

The Maple Leafs traded last season’s backup, Petr Mrazek, to the Chicago Blackhawks last week. Murray is the only goaltender with extensive NHL experience that Toronto has on next season’s roster, though the Maple Leafs will pursue another seasoned netminder to complement him.

Murray was drafted 83rd overall by Pittsburgh in the 2012 NHL Draft and began his career there backing up for Marc-Andre Fleury. Murray won his back-to-back titles in 2016 and 2017, becoming the first rookie goaltender to ever earn consecutive Stanley Cup championships.

Murray was a pending restricted free agent when the Penguins traded him to Ottawa in October 2020, and the Senators signed him to a four-year, $25 million extension. The netminder struggled throughout his tenure in Canada’s capital, going 10-13-1 with an .893 save percentage and a 3.38 goals-against average his first season.

In his second season, Murray was winless his first six games, and Ottawa swiftly placed him on waivers in November 2021. After the veteran went unclaimed, he was demoted to the franchise’s American Hockey League affiliate, the Belleville Senators. He appeared in two minor-league games, with a 1-1-0 record and a .906 percentage.

Murray returned to the Senators in January and played well (5-3-2, .937) before dealing with a pair of injuries late in the year. An upper-body ailment suffered against the Arizona Coyotes on March 5 landed Murray on injured reserve and marked the final game he’d play in a Senators uniform.

Now, Murray will have a fresh start around some familiar faces. Murray played his junior hockey with the Ontario Hockey League’s Sault Ste. Marie Greyhounds under Maple Leafs coach Sheldon Keefe and general manager Kyle Dubas. He also has a long history with Toronto’s goaltender evaluation and development coach, Jon Elkin. That could be enough to launch Murray back into his previous form as a capable No. 1 goaltender.