Oftentimes, when a UFC champion has enjoyed the level of success that heavyweight Stipe Miocic has, the topic of motivation comes up.

For instance, what keeps Miocic going, when he already has defended his title more times than any heavyweight in UFC history? What’s fueling that fire, when he already knows what it’s like to lose his title and win it back? When we’re already calling him the greatest heavyweight of all time? When his next opponent, Francis Ngannou at UFC 260 on Saturday, is a man he already dominated once before, five rounds to none?

These are all fair questions for the champ, but going into this weekend, Miocic’s level of motivation isn’t being questioned. Why not?

The answer probably has something to do with the fact that Miocic always has an obvious source of motivation going into fights. And that motivation is that, somehow, we continue to doubt this guy.

Despite all of his accomplishments, Miocic (20-3) is a betting underdog this weekend against Ngannou (15-3) — just as he was in his past two fights against Daniel Cormier and in his first fight with Ngannou back in 2018. Ahead of this weekend’s title fight, the eighth of Miocic’s career, much of the focus is, again, on the other guy — as it was the first time he and Ngannou fought.

“I love shutting people up,” Miocic said on the UFC’s “Countdown” show, one of the promotion’s primary marketing tools ahead of every pay-per-view. “My whole life.”

There are similarities between UFC 260 and UFC 220, at which Miocic beat Ngannou over five rounds in Boston — and then took the championship belt from Dana White before the UFC president could wrap it around him, because Miocic wanted his head coach, Marcus Marinelli, to do it instead.

Whether or not anyone wants to admit it, there was a feeling in 2018 that the UFC (and maybe the sport, in a broader sense) was ready to move on from Miocic to Ngannou. There was an unmistakable feeling of “us against the world” radiating from Team Miocic, and you can’t tell me that didn’t underline Miocic’s act of taking the belt that night from White.

And even though going into this weekend everyone would agree Miocic is the greatest heavyweight of all time, it’s very telling that the first thing you hear from him on the “Countdown” show is, “I love shutting people up.” If there’s a silver lining in not getting your due respect, perhaps it’s that motivation is never a problem.

18: Percentage of Ngannou’s significant strike attempts that landed in his first meeting with Miocic, who connected at a 73% clip. That translated to a 70-21 striking edge for the champ, with Ngannou landing only six after Round 1.

6: Takedowns by Miocic in the 2018 fight with Ngannou. The champion has 25 takedowns in his UFC career, tying him with former two-time champ Randy Couture for third most in heavyweight history.

0: Victories by Ngannou in which he did not get a finish. He has 15 wins in his career, 11 by knockout and four by submission.

162: Seconds that Ngannou has fought in his past four bouts, knockout wins in 45 (Curtis Blaydes), 26 (Cain Velasquez), 71 (Junior dos Santos) and 20 seconds (Jairzinho Rozenstruik). That ties Ngannou with Miocic, Derek Brunson and Shane Carwin for most consecutive first-round knockouts in the UFC’s modern era.

On Unlocking Victory, Dominick Cruz explains how Stipe Miocic was able to avoid Francis Ngannou’s powerful hands in their first fight in 2018.

Gilbert Melendez on changes that will help Ngannou:

Gilbert Melendez displays on Unlocking Victory what Francis Ngannou can do differently in his rematch against Stipe Miocic.

And the winner is … 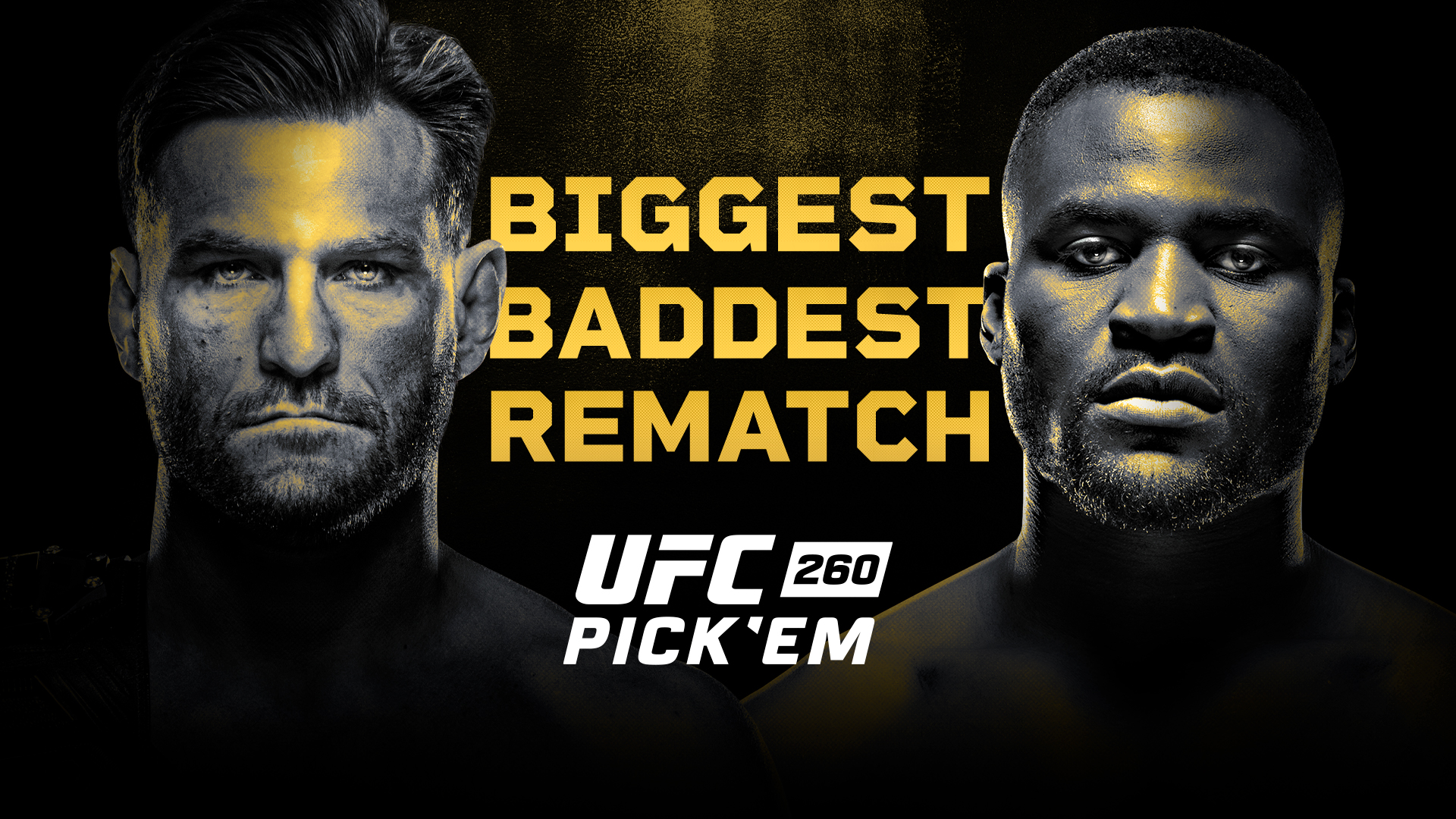 “If Stipe implements the same game plan as last time, wrestling, I believe he will win. If he doesn’t, I believe he will get knocked out,” Javier Mendez, coach at American Kickboxing Academy in San Jose, California, told ESPN. “If you take away Ngannou’s power by wrestling him, you’re going to beat him. He’s a big guy. It takes a lot of muscle for him to move around and throw punches like he does.”

Check out how Mendez and other experts break down the UFC 260 main event.

How to watch the fights

Watch the PPV and all other fights on ESPN+. Get ESPN+ here.
Watch the prelims on ESPN, ESPN Deportes or ESPN+. Download the ESPN App | WatchESPN | TV
Don’t have ESPN or ESPN Deportes? Get instant access.
Purchased the fight on your phone and want to stream on your TV? Find out how here.
There’s also FightCenter, which offers live updates for every UFC card.

1. Former welterweight champion Tyron Woodley will look to snap a career-long three-fight losing streak when he faces Vicente Luque, who has won two straight and eight of his past nine. Woodley, who is No. 10 in the ESPN welterweight rankings, will have his standup defense tested, as Luque lands 5.72 significant strikes per minute, the highest rate among active 170-pounders.

Monday through Friday, host Pablo Torre brings you an inside look at the most interesting stories at ESPN, as told by the top reporters and insiders on the planet. Listen

2. Sean O’Malley, coming off his first loss, faces Thomas Almeida, who knows a thing or two about the difficulty of rebounding. Almeida started his UFC career 4-0 but since then is 1-4. This bantamweight bout could heat up quickly. O’Malley (12-1) has eight first-round finishes and Almeida (22-4) has 17.

3. Gillian Robertson, who fights Miranda Maverick, has six wins at flyweight, tying her with champion Valentina Shevchenko and title challenger Katlyn Chookagian for the most in division history. Maverick won her UFC debut last October by first-round knockout and has won six fights in a row.

4. When Khama Worthy fights lightweight Jamie Mullarkey, he’ll be trying to bounce back from having a seven-fight winning streak ended in a TKO loss to Ottman Azaitar in September.