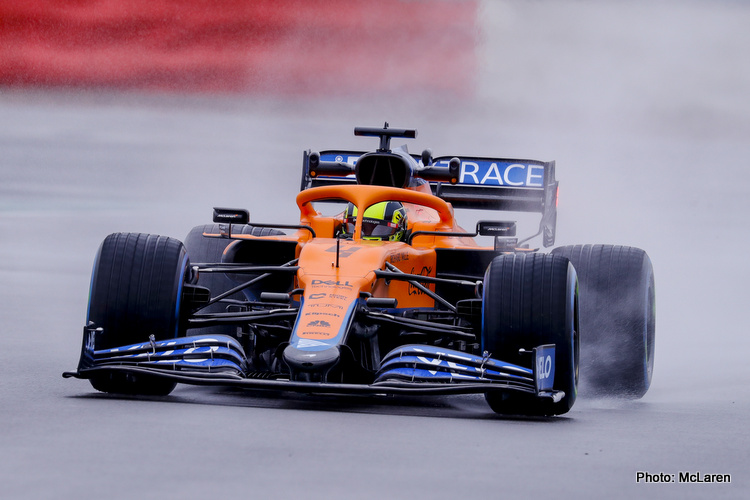 McLaren driver Lando Norris has been impressed with the transition to Mercedes engines so far and said that he cannot wait for the season to begin.

Mercedes became McLaren’s power-unit supplier over the off-season, reuniting a partnership that ended after the 2014 season.

The Woking-based team finished third in the constructors’ championship last season with Renault engines in the back and have looked strong in preparation for the new campaign, running a very clean programme throughout Formula 1 pre-season testing in Bahrain.

Norris’ teammate Daniel Ricciardo topped two of the morning sessions, while their creative diffuser design attracted some attention from other teams.

There were concerns that the new development token system could hinder the team’s progress, given the need for them to integrate their new power-unit, but so far things seem to have run smoothly.

“I think altogether it’s been a smooth operation with Mercedes power so far,” Norris said following the conclusion of pre-season testing. “I think we’re happy with how things have gone.

“The bit for me is understand all the new switches and ways of working that they have – that’s one of the biggest things to get used to – and on the whole it’s that little step forward in a lot of areas.

“But there are some areas that still need some work, and we’ve been working very closely with them over the last three days because the other teams which are Mercedes-powered have been with Mercedes for a while.

“There’s just that constant everyone kind of gets used to things, and we’ve come in from Renault with fresh eyes, different perspective, different feelings, and I think we’ve really been able to add and improve in some areas.

“So very productive between us and the Merc guys – HPP – and I think we can be happy with the improvements we’ve made over the last three days.

“There’s still things to work on, again not just with the car but with the PU and so on, but it is at the moment looking good and we’re happy with how things have gone.

“So we have to wait until qualifying to really unlock the potential and see what the baby’s got.”