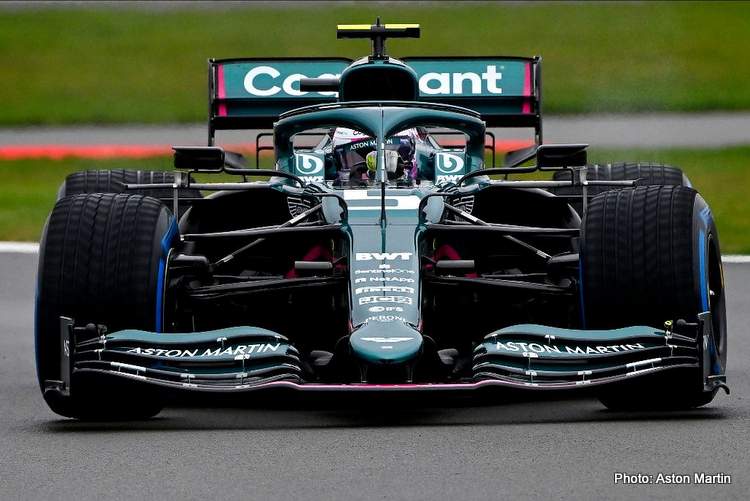 Sebastian Vettel swapped his red overalls of Ferrari for the racing green of Aston Martin, the four-time Formula 1 world champion getting his first taste of the AMR21 on track.

After six years of wearing the scarlet race suits of Ferrari, the German donned the racing green that are the hallmark of Aston Martin’s racing programme.

Ahead of his first day at the wheel, Vettel told reporters during the AMR21 launch: “I think the colour, it’s amazing, I think it will be unique, and I think already it’s one of the best-looking cars on the grid. So I can’t wait to see how it feels when you’re actually driving it.”

Vettel, and teammate Lance Stroll, were at the wheel at a damp Silverstone today for their allocated filming day and shakedown for the Mercedes-powered AMR21.

The team reported at the end of day: “61 years after an Aston Martin Grand Prix car last competed, the Aston Martin Cognizant Formula 1 today gave the on-track debut to its 2021 Formula One car, the AMR21, at Silverstone for a promotional running event.

“Roy Salvadori and Maurice Trintignant each drove a DBR5 in the 1960 British Grand Prix, the last running by Aston Martin in its Formula One programme until the return of the brand, as the Aston Martin Cognizant Formula One™ Team, for 2021.

Visually, the 2021 car continues to take a leaf out of the mighty Mercedes package which dominated last year, as the teams forge closer ties.

For Vettel, it is his fourth team in the top flight. He made his debut as a substitute for injured BMW-Sauber driver Robert Kubica at the 2007 United States Grand Prix. He then moved to Toro Rosso where he famously won the 2008 Italian Grand Prix.

He was promoted to Red Bull in 2009 and went on to win four world titles together before his departure to Ferrari in 2014. What started as a partnership with huge potential fizzled out with the 33-year-old losing his way when the Italian team banked on Charles Leclerc for the future.

This season, Vettel will be looking to put behind him woeful recent form and regain the magic he has in him to turn Lawrence Stroll’s labour of love into a championship-contending outfit.

Next up for the 33-year-old and his new team will be testing in Bahrain on March 12-14, before Aston Martin makes its long-awaited return to the Formula 1 World Championship grid in the Bahrain Grand Prix on March 28.