Francis Ngannou had just dropped UFC heavyweight champion Stipe Miocic with a jab and had him trapped against the cage. The big man swarmed, a finish seemingly within his grasp. But Miocic escaped with urgency and moved toward the center of the Octagon, where the champion made his stand.

Miocic let go with a straight right hand that stopped Ngannou in his tracks. But the pause lasted for only a single tick off the clock in Saturday’s UFC 260 main event. Ngannou barely hesitated before stepping forward with a left hook that connected on the button. Miocic fell, Ngannou pounced with one final swing of his fist, and there was a new champion.

It was a stunning moment, seeing the heavyweight widely acclaimed as the greatest ever lying on his back, all of the fight drained from him, and his successor to the throne calmly walking away with one finger in the air, signifying that he finally was No. 1.

The understated celebration was right in character for Ngannou, whose chiseled physique and sledgehammer fists might make him seem right out of central casting for an imposing heavyweight champ, but whose softspoken way suggests gentleman more than fighting man. 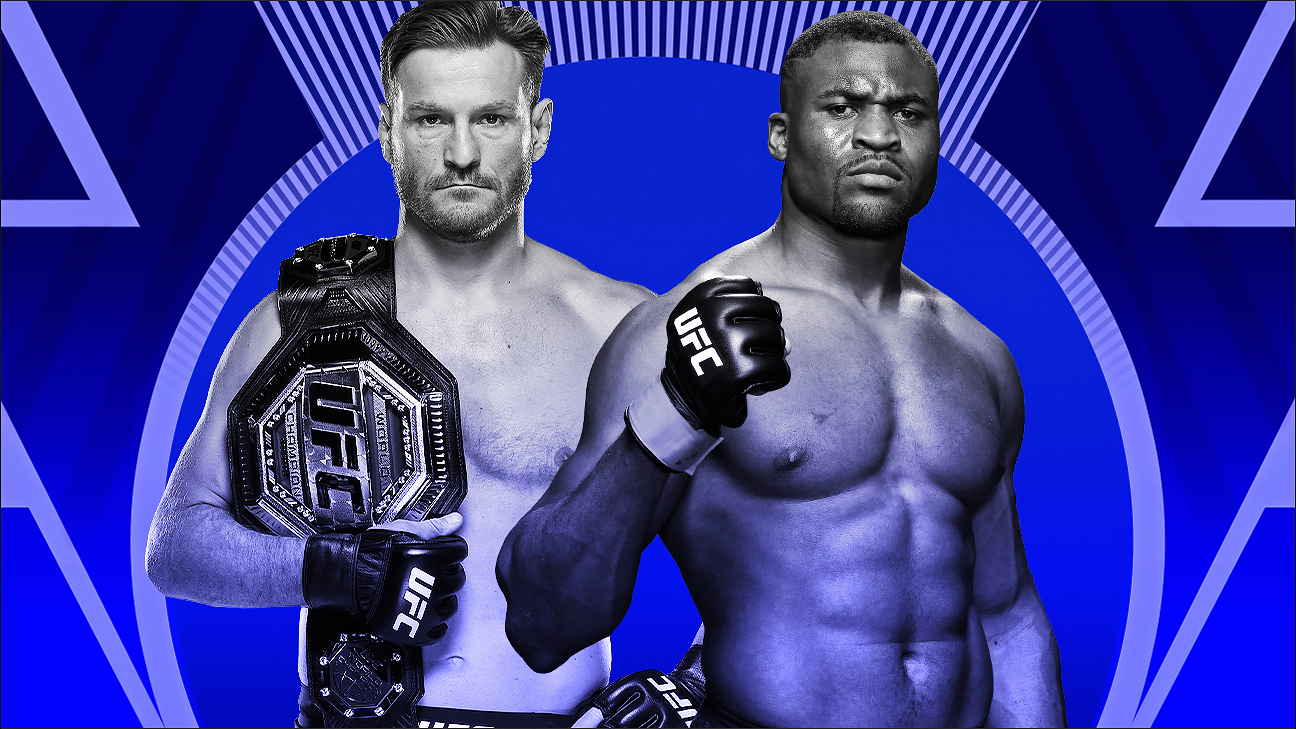 If the PPV is purchased, all fights from UFC 260: Miocic vs. Ngannou will be available to watch on ESPN+.

Watch the complete card on ESPN+

Ngannou was out of character in a different way on this night. The big man with heavy hands, who had knocked out his four most recent opponents with violent bursts that lasted 71 seconds or shorter, finished this one by knockout 52 seconds in — but at 52 seconds of the second round. And yet, even though it took an eternity in Ngannou time for him to knock out Miocic and become heavyweight champion, this was as satisfying as a night can be.

Satisfaction came, most obviously, because the elusive title belt Ngannou had been after for years was at stake. There was also gratification derived from this fight, a rematch of a 2018 meeting with Miocic in which Ngannou had been schooled and humbled, playing out in a totally different way from the first. It wasn’t simply that Ngannou won this time. He showed patience, remembering how sapped of energy he had been after just one round of that five-rounder against Miocic.

And Ngannou also put on display an expanded skill set. By making such fast work of his four most recent previous opponents, Ngannou had not had time to show off anything other than those fight-finishing fists of his. But on Saturday in Las Vegas, by the time Round 1 was over he had utilized kicks to both the legs and head, punches aimed not just at the head but at the body as well, and perhaps most important of all, defensive wrestling that kept Miocic from smothering him on the canvas, as he did back in 2018.

“I don’t have the vocabulary to express this, because it feels so amazing,” said Ngannou, a native of Cameroon who trains in Las Vegas. “Even though I had been winning fights, I had this thing inside of me that I never released — a promise that I made to myself when I was young, to one day prove to the doubters and people who thought I was beneath them that … if one day I ever had the opportunity, I would do something great.”

That he did, although his big night was slow in arriving.

For a man who gets his business done as rapidly as Ngannou does, it sure took him a while to find his way to the throne of “baddest man on the planet.” That esteemed status seemed a fait accompli years ago after Ngannou destroyed his first six UFC opponents, riding into his first shot at Miocic’s title on the strength of four straight finishes inside two minutes. But the champ ended up turning that night into his own glorious showcase. Miocic’s dominant decision win was a huge step toward building his case as the greatest heavyweight in MMA history.

For Ngannou, the thrashing was so demoralizing it spilled over into his next fight, a forgettable staring-match loss to Derrick Lewis that put Ngannou’s future as a contender in doubt.

But over the next year, Ngannou erased all doubt by quickly knocking out a fellow top contender (Curtis Blaydes, 45 seconds) and a former champ (Cain Velasquez, 26 seconds) to reassert himself at the head of the line for a title shot. Problem was, there was no title shot to be had. At the time, Miocic was engaged in a trilogy with Daniel Cormier that for two years turned the heavyweight highway into a parking lot.

Francis Ngannou addresses a potential bout with Jon Jones, and where that fight should take place.

When all obstacles cleared away and Ngannou’s second shot at the belt finally did present itself, the 34-year-old did not waste it.

Unlike the 2018 meeting, in which Ngannou came out with a fury and emptied his fuel tank before the first round was over, he fought with poise and smarts this time. Ngannou fought like he was prepared for a full 25 minutes. It was only after Miocic came out with added aggression to start Round 2 that Ngannou shifted into a higher gear and found the knockout and the glory.

Congratulations, champ. Enjoy the spoils of victory … for a few minutes. Take a deep breath. Celebrate with friends. Maybe a nice meal. Then get back into the gym to prepare for the biggest challenge of your life.

Not literally the biggest, at least not in a physical sense.

Jon Jones, who ruled at light heavyweight for most of the last decade, has been bulking up lately to take his shot at the heavyweight title. This has been a long time coming, and UFC president Dana White said before UFC 260 that Jones will be the next challenger for Saturday’s winner, and that the fight of all fights could happen this summer. There are financial matters to be settled, of course, as postfight comments by both Jones (on social media) and White (at the UFC news conference) made clear. But this fight is too big to not get done.

So, after defeating the greatest heavyweight of all time, Ngannou next gets to face perhaps the greatest of all time in any weight class. What a 1-2 punch to start 2021 with a bang. And no doubt two fights that will be tremendously lucrative.

The spotlight does not shine any brighter than it will for Ngannou’s first title defense, unless he were to eventually follow through with his stated desire to cross over to boxing and step in the ring with Tyson Fury or Anthony Joshua, both of them heavyweight champions and the best of the era in that sport. If that career trajectory sounds more like pie-in-the-sky delusion than sweet ambition, you’ve simply not been paying attention to the spectacle of combat sports, from the sucker-is-born-every-minute Floyd Mayweather vs. Conor McGregor circus to the anyone-is-a-pro-boxer-if-people-pay-to-watch family business of Jake and Logan Paul, champions of YouTube.

Within MMA, though, Jones is the ultimate proving ground. To defeat him would send shockwaves, because it’s never been done. That sets Jones apart from Georges St-Pierre, Anderson Silva, Amanda Nunes and Demetrious Johnson, the other fighters often mentioned in GOAT conversations. They’re all-time greats, every one of them, but they’ve all been defeated. Jones has not.

(Detail-oriented readers might notice a “1” in the loss column of Jones’ record, but that was a dubious disqualification early in his UFC career in a fight that he was thoroughly dominating.)

Ngannou is up for the challenge of handing Jones his first real defeat. He has no choice. This all-season sport never stops, especially if you own the shiny belt that all of the other big guys want. Not only them, but also a slightly smaller guy who’s probably never been described that way before in his life.

Smaller? Jon Jones? He’s 6-foot-4, same as Ngannou, but while the new champ weighed in at 263 pounds on Friday, Jones has posted on social media that he’s up to 240. That’d make him heavier than Miocic, who stepped on the scale for this fight at 234 pounds. But Miocic is used to being the smaller guy — he’s weighed in lighter than his opponents in his past five fights. Jones, on the other hand, has always banked on being the bigger man. He has been too physical for 205-pounders to handle. That will no longer be the case now that Jones is swimming with the big fish. Ngannou can’t wait to drown him.

“For my opinion, Jon Jones is the greatest of all time for mixed martial arts. Him moving up is a challenge that I will take and put it on my record,” Ngannou said. “It will be a very good challenge for me, a very good thing to put on my résumé. But he is going to be the challenger. I am the champ. He’s coming up and looking for me. I’m ready.”

So are fight fans. The crowning glory of Saturday’s heavyweight championship fight is still buzzing, and oh boy, we can’t wait for the next one.