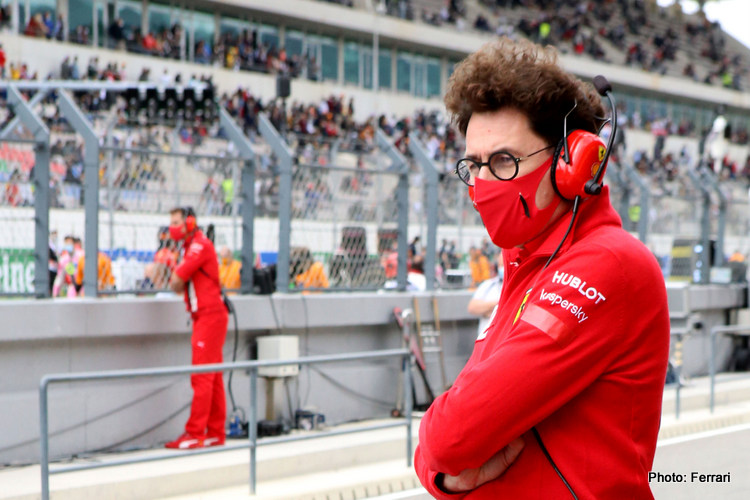 Mattia Binotto was absent from Ferrari’s pit-wall at the 2021 Turkish Grand Prix, where both his drivers Charles Leclerc and Carlos Sainz drove  to fourth and eighth respectively, a result Binotto credited to the new power unit upgrade that’s giving them a small advantage.

Leclerc received the upgraded power unit on the weekend of the Russian Grand Prix, where he started 19th, and showed encouraging pace as he climbed up the order into the points, before a poor strategy call when the the rain came late in the race, saw him finish 15th. The pace was there though.

Sainz was given the upgraded power unit in the next race in Turkey, started 19th as well, and finished a strong eighth after pulling off some entertaining overtaking moves, as he sliced through the grid; his performance confirming the improvement promised by the new Ferrari power unit.

Binotto spoke to Formula 1’s official website about the upgraded unit, and the performance advantages it offered for the team and its drivers.

“It is giving us a small advantage,” he said. “I don’t want to quantify it on lap time because it is track-dependent. It’s not only pure ICE power, it’s energy recovery, so it’s a bit complex.

“But certainly it’s giving us an advantage,” Binotto reiterated, and continued: “If I look as well at quali with Charles, it was the… fourth [fastest] lap time. If I look behind him, it was very close, and I’m pretty sure that a couple of positions would have been lost without that specification.”

The team boss stressed that the decision to give his drivers the power upgrade was taken with 2022 in mind, as the team look to have a competitive power unit before the anticipated development freeze (on power unit development) becomes effective next year.

“As we said at the very start with Charles, when we introduced [the new hybrid system] in Sochi, the first objective was try to increase our experience in the view of 2022,” Binotto insisted.

“That’s why we introduced it as soon as possible, trying to rush it, taking some risks as well, but it’s all a risk assessment.

“Obviously for us, it’s clear [that we need to] get mileage on track and do our own experience before 2022 when the power units will be frozen… For us, that was the key and the reason [for the change],” he explained.

Although third in the constructors’ standings was not a priority for the Scuderia early in this season, as they focused on building a competitive car for 2022 under the new aero regulation, but as the season progressed, the Maranello squad find themselves only 7.5 points behind McLaren who are currently third. With six races to go, Ferrari are poised to usurp the Woking outfit, something Binotto admits is a realistic target now.

“[P3] is certainly a target that we have already communicated to the team,” he admitted. “I think everybody is on board with that.

“It would be great to finish third,” Binotto hoped. “So yes, we intend to finish, or at least our objective is to finish, third at the end of the season.”

Ferrari had a miserable 2020 season where they finished in sixth place on the constructors’ standings. They have shown some improvement this year, but the team hopes that 2022 would be the year they make their breakthrough, in a year when the sport is undergoing a major regulations change.