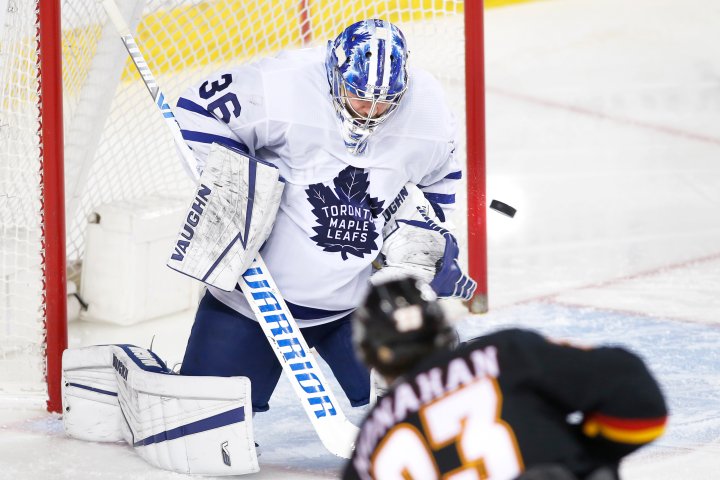 CALGARY — Sheldon Keefe had 30 seconds to settle things down.

The Maple Leafs head coach had just watched Toronto’s anemic power play — one loaded with talent, but stuck in neutral on a mystifying 0-for-29 run the last three weeks — surrender a short-handed goal to tie Monday’s game 3-3 midway through the third period.

There was still time for the Leafs to operate at 5 on 4, however, so Keefe sent the No. 1 unit back over the boards after calling his timeout in hopes they would regroup and make amends.

“It’s probably as rock bottom as the power play can get the way it’s been going,” he explained. “The guys responded beautifully.”

Auston Matthews scored his second goal of the night on that man advantage to increase his NHL-best total to 27 and Jack Campbell made 26 saves to equal a franchise record with his ninth straight win as Toronto defeated the Calgary Flames 5-3.

“It was a nice reset for us,” Matthew said of Keefe’s move to press pause. “Just relax, plenty of time left on the power play. It wasn’t a pretty one … but that was a nice one to get our power play back on track.”

John Tavares, with a goal and an assist, Jason Spezza and Wayne Simmonds provided the rest of the offence for Toronto (26-10-3), which has won four in a row and improved to 7-0-1 over its last eight games. William Nylander added two assists.

“It just shows how well we’re playing as a group,” Campbell said. “You don’t get those wins without everybody. Tonight we got a huge contribution from the power play to put the game away. We’ve been really building our game all year.

“The record’s a huge honour. But it’s all about winning.”

Mikael Backlund, with two goals, and Andrew Mangiapane replied for Calgary (16-21-3). Jacob Markstrom stopped 25 shots for the Flames, who have lost four straight and eight of their last nine in regulation. Elias Lindholm had two assists.

“It’s tough,” Backlund said. “We battled, we find a way to tie the game.

“They come back and beat us by two anyways … it’s really hard.”

North Division-topping Toronto, which swept a four-game trip through Winnipeg and Calgary and tops the NHL with a 14-4-1 road record, leads the second-place Jets by six points in the standings, while the Edmonton Oilers are seven back in third.

Down 2-1 through 40 minutes, Calgary got even at 4:17 of the third when Backlund’s shot off a scrambled draw hit Toronto defenceman Travis Dermott and fooled Campbell for his seventh.

The Leafs responded at 7:13 when Simmonds redirected Pierre Engvall’s pass home from his knees for his sixth, and first in nine games since returning to the lineup from a broken wrist.

“I (feel) a lot better,” said Simmonds, who was critical of himself prior to the road trip. “I’ve got my timing down, I’m starting to play the game the right way.

“I’m happy with my performance, and even happier about the team’s performance over the last four games.”

Toronto then went on the man advantage and gave up that short-handed goal when Backlund deposited his eighth at 10:05 on a 2-on-1 before Keefe called his timeout and set the stage for Matthews to bang the winner past Markstrom.

“It’s no secret our power play’s been struggling,” Spezza said. “I thought it was a great move to keep them out (and) give them a chance to get it back.

“In clutch fashion, they did.”

Tavares picked up the only assist for the 800th point of his NHL career, and Toronto’s captain then made it 5-3 just 1:20 later when he scored his 12th, and second in as many games.

Campbell capped things by robbing Matthew Tkachuk late with a sparkling glove save to put a bow on his ninth consecutive win.

“He’s battling his ass off out there,” Keefe said. “He’s been dealing with injuries. He’s had extended periods of time off and it hasn’t fazed him. It’s been fun to watch that happen, and obviously nice to have him with us.”

The Leafs opened the scoring at 3:10 of the second following a grinding shift that ended with Spezza swatting home for his ninth goal — and fourth in the last nine games — to equal the veteran forward’s total from 2019-20.

Matthews made it 2-0 at 7:53 when he took a pass from Nylander and snapped his 26th past Markstrom. After going five games with out a goal last month, Matthews has now scored five times in his last six contests.

Leafs blue-liner Justin Holl cleared a Sean Monahan chance off Campbell’s goal line prior to Toronto’s outburst, but the Flames finally got on the board with 1:54 left in the period when Noah Hanifin’s shot deflected off a leg in front right to Mangiapane, who made no mistake in burying his 12th.

After the Leafs gave Campbell the night off Sunday — Veini Vehvilainen backed up third-stringer Michael Hutchinson in a 4-2 win over the Flames — as he continues to manage a nagging leg injury, the 29-year-old had to be sharp early.

Dermott also scooped a loose puck off Toronto’s goal line before Campbell, who was initially hurt Jan. 24 in Calgary, held the fort on the ensuing melee that saw him deny Joakim Nordstrom while prone on the ice.

“It’s just really fun to be a part of,” Campbell said of the surging Leafs. “We still have a lot of work to do.

Notes: Campbell and Potvin’s nine straight wins both came at the start of their respective seasons. … Markstrom played the 300th regular-season game of his career, becoming the fifth Swedish goalie to reach that milestone. … Flames defenceman Rasmus Andersson dressed for his 200th NHL game.