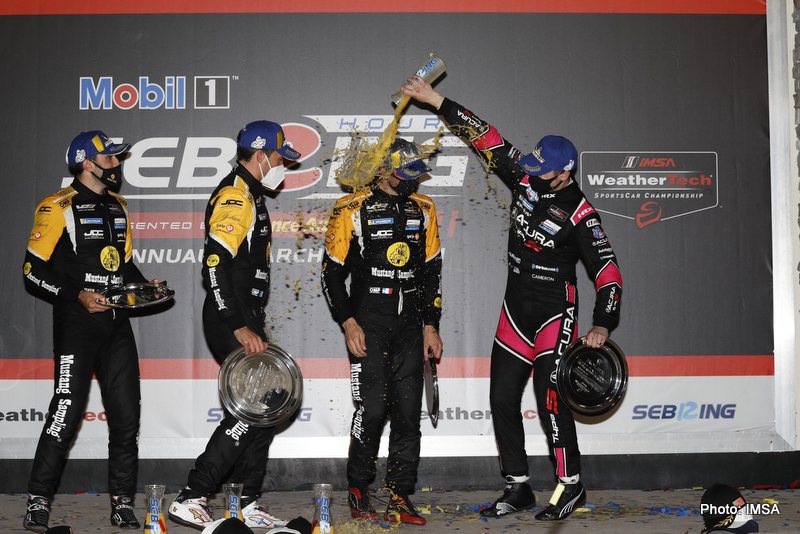 It was a busy racing weekend over in the States with IMSA returning with an action-packed 12 Hours of Sebring and a NASCAR triple-header at Atlanta.

IMSA’s 69th running of the 12 Hours of Sebring saw drivers and cars take a pummelling from the concrete bumps round the clock, with former Formula 1 driver Sebastien Bourdais and his #5 JDC-Miller Motorsports Cadillac DPi take the flag at the end of running. Partnered by Loic Duval and Tristan Vautier, the #5 came back from outside of the top five with a late accident opening the race right up. The #55 Mazda of Harry Tincknell, Oliver Jarvis and Jonathan Bomarito finished second, 1.435 seconds adrift of the winners and just clear of the #48 Ally Cadillac, driven by Kamui Kobayashi, Jimmie Johnson and Simon Pagenaud.

F1 departee Kevin Magnussen was again robbed of a near-certain victory, losing out at the Rolex 24 previously, when the car, then piloted by Scott Dixon, was involved in an incident with a GTLM car coming to the pitlane. The Chip Ganassi entry, which had been dominating the field, subsequently lost a couple of laps on pit road.

A number of heavy accidents truncated green flag running throughout the race, but thankfully all drivers came out unscathed and the race was able to continue as planned.

Driver is safe and walked away thanks to the amazing safety tech of the LMP2 platform. pic.twitter.com/BbMa0zc9Zo

In stock car racing, NASCAR headed to Atlanta for the Folds of Honor Quiktrip 500. Ryan Blaney became the sixth different winner in as many races. The first time since 2014. 2000 saw ten unique winners in the opening ten races. Blaney beat Kyle Larson to the flag in a race where the #5 of Larson looked certain to win after dominating stages 1 and 2. Larson got caught by lapped traffic with under ten laps to go, conveniently Blaney’s Penske teammates Joey Logano and Brad Keselowski, which allowed the #12 to catch and pass the #5.

Another win, another checkered flag given to a kid in the stands. (Via @nascar) pic.twitter.com/6PR7cpJ00Q

Ryan Blaney said throughout the entire last stage, he thought he had a chance to beat Kyle Larson: pic.twitter.com/BEbdvpJJoC

Justin Allgaier’s win ahead of Martin Truex Jr in the Xfinity series was overshadowed by a post-race fight between Noah Gragson and Daniel Hemric who had been involved in a pitlane fiasco that continued on the track and saw fists fly. Truex competed his first second-tier race since 2010, and his lack of running didn’t seem to hinder him as he eased to victory in stages 1 and 2. Truex was sent to the back of the field after a penalty, making his way back to second, 1.5-seconds behind eventual winner Allgaier at the flag. The

Hot tempers in Atlanta are the dominant headline this week. Here’s a look at Gragson-Hemric: pic.twitter.com/SEJZCwIxxa

In the next week Stateside, the NASCAR Cup Series and Trucks take on a new challenge for the dirt race at Bristol Motorspeedway. The event has been hyped up for months now by those in the NASCAR circles and is sure to provide for an eventful weekend. Practice and Heat races are on the cards for both series ahead of a final, points-paying main event.