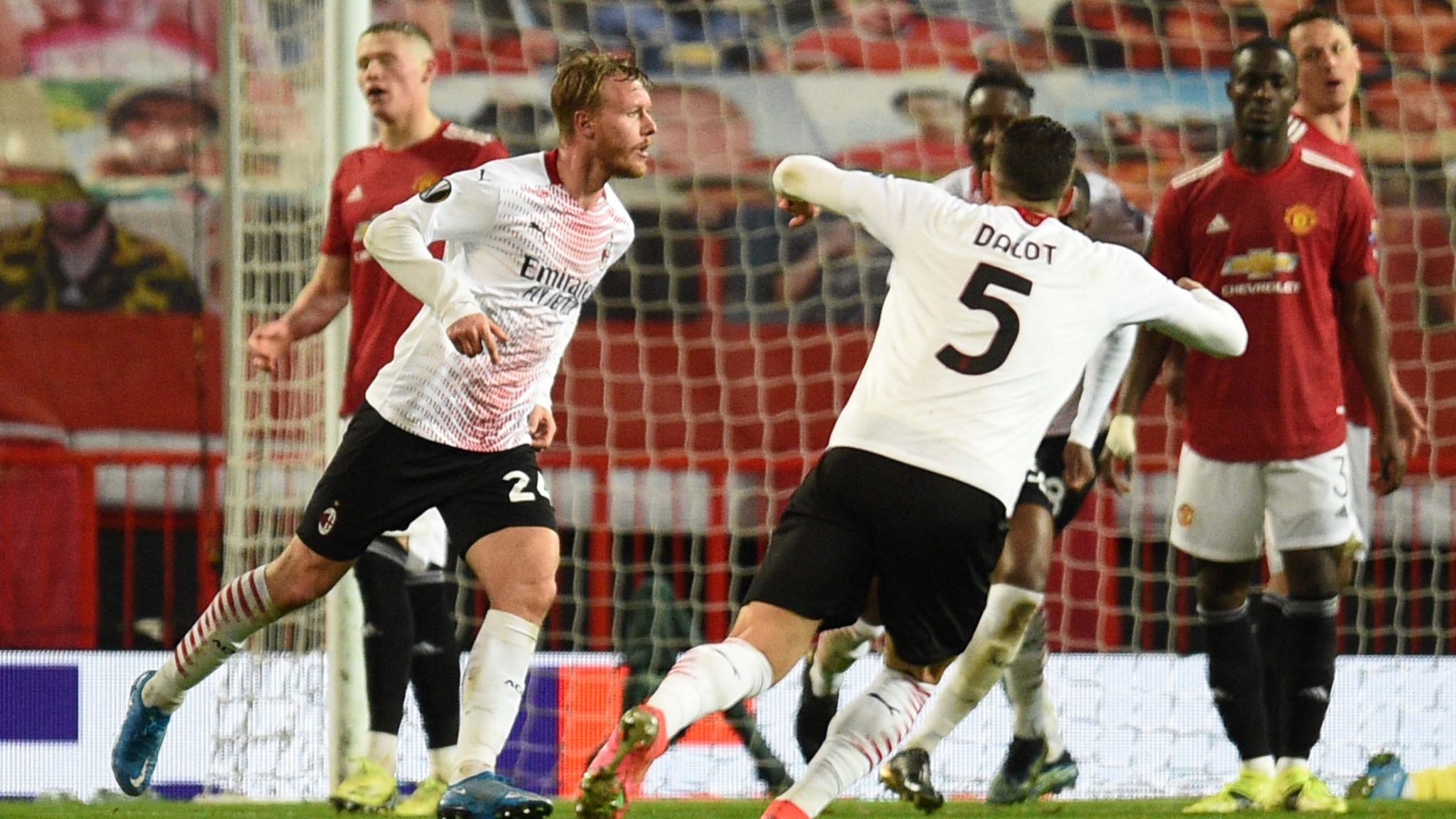 Simon Kjaer scored a last-gasp equaliser to give AC Milan a dramatic 1-1 draw at Manchester United after Amad Diallo scored his first goal for the hosts in the Europa League last 16 first leg on Thursday.

Kjaer netted with a bullet header in the final seconds of stoppage time at Old Trafford.

In only his third appearance for United, Diallo gave a glimpse of the potential that persuaded the Premier League club to pay £18 million ($25 million) to sign him from Italian side Atalanta in January.

Just five minutes after coming on as a half-time substitute, the 18-year-old put United in front with a superb header.

Legends including Paolo Maldini, Cristiano Ronaldo, Kaka, Wayne Rooney and Ronaldinho have all featured in previous clashes between United and Milan.

While it is far too soon to place Diallo in that company, United manager Ole Gunnar Solskjaer will hope that scoring with his first ever effort on goal bodes well for the much-hyped youngster’s future with the club.

At 18 years and 243 days, Diallo is the fourth youngest player to score for United in a major European competition, after Mason Greenwood, Marcus Rashford and George Best.

Diallo, yet to start for United, made his debut as a substitute in the Europa League last 32 first leg against Real Sociedad.

This was his second home appearance and scoring at Old Trafford’s famous Stretford End was even sweeter for the precocious starlet.

While Diallo’s headline-grabbing act was significant, it wasn’t enough to help United build on the momentum from their 2-0 win at Premier League leaders Manchester City on Sunday.

With United 14 points behind City, the Europa League and FA Cup represent their best hopes of winning the first trophy of Solskjaer’s reign.

The second leg in Italy next Thursday won’t be easy for United on the evidence of a composed and determined performance from injury-hit Milan’s crop of promising youngsters.

Crowned European champions 10 times between them, United and Milan were once feared for their swashbuckling play and financial muscle, but both clubs have lost their lustre in recent years.

In a sign of the drop in standards at Old Trafford and the San Siro, the first meeting between two of the world’s most historic teams since 2010 was their first outside the Champions League knockout stages.

Milan called the shots early on and Rafael Leao had the ball in the net when he sprinted clear to fire home, only to see his effort ruled offside.

Stefano Pioli’s side were denied an 11th-minute opener after Franck Kessie pounced on a long throw and smashed a superb strike past Dean Henderson from just inside the area.

Kessie’s celebrations were premature as a VAR review showed the ball had glanced off the midfielder’s arm before his shot.

Harry Maguire was guilty of an incredible miss when the United defender, no more than a yard out, somehow shot against the post after Bruno Fernandes flicked on Alex Telles’ corner.

United had moved the ball too slowly and with too little purpose in the first half, so Solskjaer replaced Anthony Martial with Diallo at half-time.

After a brief delay while he had a wristband taped up on the touchline, Diallo’s introduction proved an inspired move as he broke the deadlock in the 50th minute.

Fernandes unfurled a delightful long pass towards Diallo, who made an incisive run behind the Milan defence and looped a clever backwards header over Gianluigi Donnarumma.

But United failed to build on that lead and Milan’s intelligent play was rewarded with just seconds left when Kjaer powered his header past Henderson from a corner.