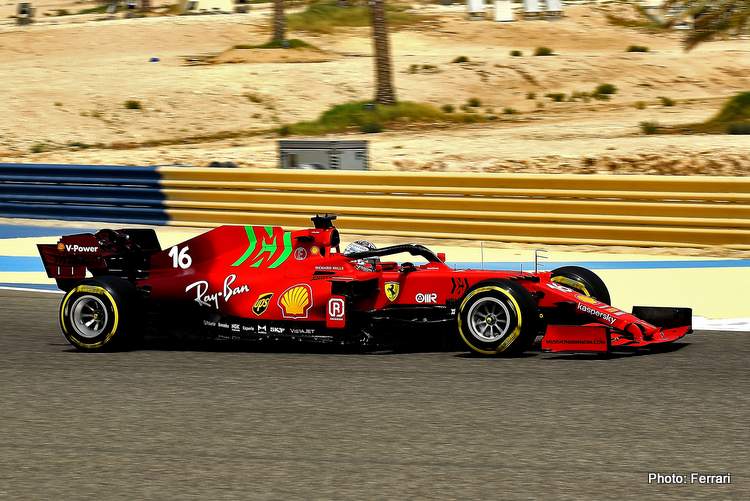 Charles Leclerc was encouraged by a problem-free first day of 2021 Formula 1 preseason testing for Ferrari, the Italian team reporting no major issues, apart from a telemetry glitch, on Friday evening.

Although the Reds did not set the timing screens alight, Leclerc completed 59 laps during the slower morning session before handing over to new teammate Carlos Sainz who added another 56 laps to the new SF21.

The team wrote in their review of their first day at Bahrain International Circuit:

Charles dove out of the pits onto the Sakhir track for a short first run with the car fitted with a rake, which helps gather data for the engineers on how the car is behaving.

Then, after a quick check, Leclerc was back on track for some longer runs with the C2 compound, doing several laps in consistent conditions. He drove from 10 up to just before 2 pm, also running the C3 compound.

However, with ten minutes remaining, he was instructed by the team to park the car at the side of the track because of an anomaly with the combustion spotted on the telemetry. He did 58 laps, or 313.3 kilometres, his best time being a 1:33.242.

Leclerc was content with his day’s work: “The first day in a new car is always very interesting, after all the work carried out over the winter. We completed the whole programme without any major problems and the first impression of the car is pretty good.

“But obviously, it’s far too early to give a full assessment. Now I can’t wait to get behind the wheel again tomorrow!” added the Monegasque.

For the afternoon session with Sainz, the car underwent the necessary checks and was prepared for his debut at the wheel of the SF21 shortly before 4pm local time.

“Despite strong winds, limited grip and poor visibility, the Spaniard’s work programme was similar to that of his team-mate, running both the C2 and C3 compounds. Carlos completed 57 laps (308,5 kms), the best in 1:31.919 putting the SF21 fifth fastest on the day.

Sainz reflected on his first day in Red: “In general I think today was a positive first day of testing, where the target was to complete our whole run programme and we did it, so happy with that.”

And then echoed his teammate: “I guess everyone wants to figure out the performance of each car after today, but I think it is way too early to tell, and very difficult to know in these kinds of conditions – full of sand, very windy and with big variations in temperatures.

“All in all I think we can consider today a very good day. Thanks to everyone at the track and back at the factory. We keep working!” concluded the Spaniard.

Alfa Romeo seemed also had a solid day, only a few tenths shy of their engine suppliers in both sessions with Kimi Raikkonen and Antonio Giovinazzi amassing 130 laps during the course of the first day. A good one for the Swiss outfit.

In contrast, Haas had issues with their Ferrari-powered car in the morning which meant only 15 laps for rookie Mick Schumacher. It was better in the afternoon for Nikita Mazepin who managed 69 laps but well off the pace. 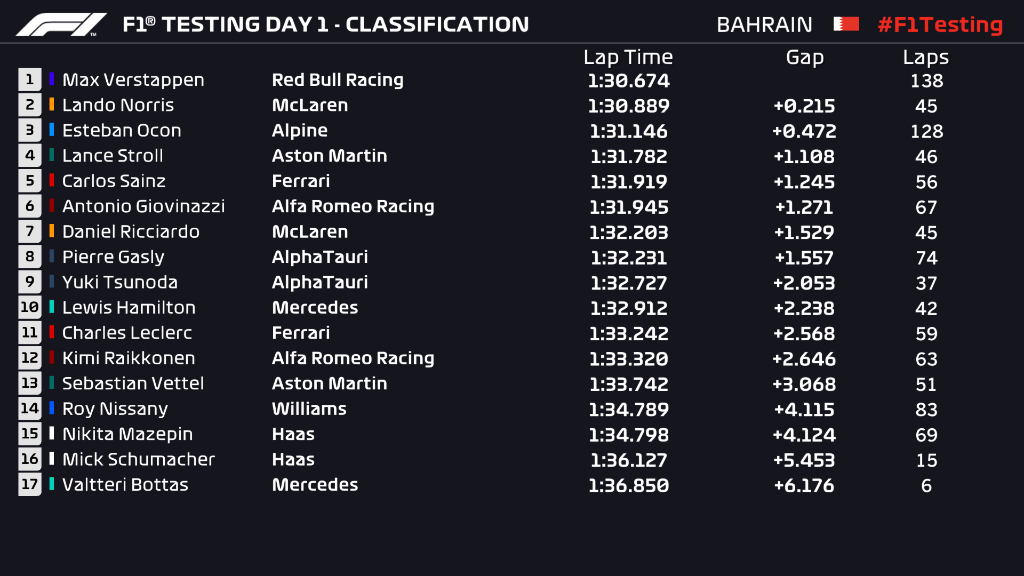