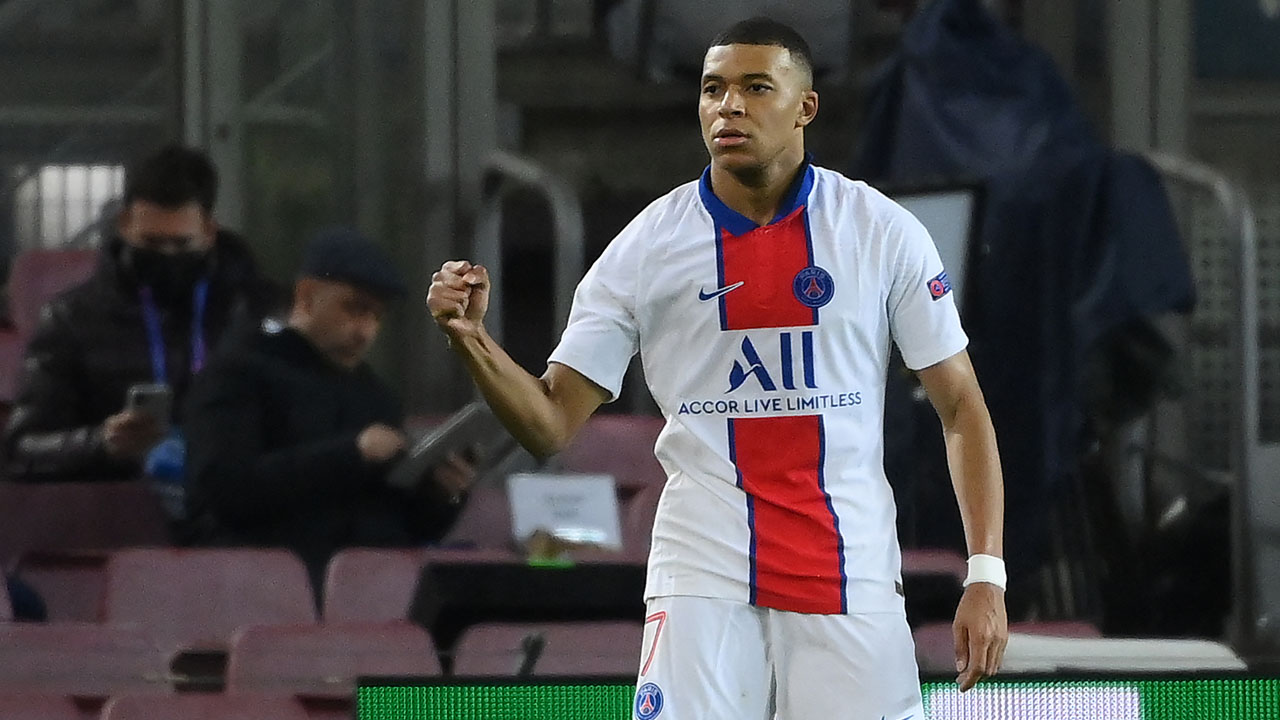 Paris Saint-Germain’s French forward Kylian Mbappe celebrates after scoring a goal during the UEFA Champions League round of 16 first leg football match between FC Barcelona and Paris Saint-Germain FC at the Camp Nou stadium in Barcelona on February 16, 2021. (Photo by LLUIS GENE / AFP)

Kylian Mbappe underlined why he is seen as a future Ballon d’Or winner with his midweek Champions League hat-trick for Paris Saint-Germain against Barcelona, but Sunday’s opponents Monaco hardly needed any warning about the threat posed by the electrifying striker.

Monaco head to the Parc des Princes not as lambs to the slaughter but as rivals to PSG in the Ligue 1 title race, with five points currently separating the principality club in fourth place from the Parisians, who are second, one point behind leaders Lille.

Under Niko Kovac, Monaco are a force in France once again, four years after Mbappe’s sudden, stunning explosion onto the scene helped fuel their last title triumph.

Mbappe was stating his aim of one day winning the Ballon d’Or when he first signed for Monaco as a 14-year-old in 2013.

After turning 18, he scored six goals in six Champions League knockout games for the principality side in 2016/17 while also starring as they pipped PSG to the title.

Then he was off, with Monaco unable to turn down a 180 million-euro ($215m at the time) offer from Paris.

Three and a half years on, and his hat-trick against Barcelona took Mbappe onto 111 goals for PSG, making him already the club’s third-highest goal-scorer of all time, behind only Zlatan Ibrahimovic and his erstwhile teammate Edinson Cavani.

PSG signed Mbappe, and Neymar, to conquer Europe, but in the wake of the Barcelona game the 22-year-old France World Cup-winner was eager to point out that his team could not afford to take their eye off the ball domestically.

“We are focused on our objectives and we have a very important match on Sunday in the league because we are not top and we have no margin for error,” Mbappe told broadcaster RMC Sport.

“We need to turn our attention back to the league immediately because as magnificent as this game was, we have won nothing.”

The mere presence of Mbappe is not always a guarantee of success though — PSG lost 3-2 in Monaco when the teams last met in November, despite the forward scoring twice.

On Sunday, like in Barcelona, coach Mauricio Pochettino will be without the injured Neymar, while Angel Di Maria has been on the sidelines too.

Monaco have crept up into contention at the top of the table on a 10-game unbeaten league run.

They had won seven on the bounce before a 2-2 draw with Lorient last time out.

One to watch: Terem Moffi
The 21-year-old Nigerian striker has been the catalyst of Lorient’s remarkable recent revival. Signed for a reported eight million euros ($9.7m) from Belgian club Kortrijk in October, Moffi scored on his Ligue 1 debut but didn’t score in any of his next nine games as Lorient struggled at the foot of the table. However, he has netted eight goals in nine games since then, helping the Brittany side climb out of the bottom three on a run of five matches unbeaten.

Moffi notably scored a late winner against PSG and a brace in last week’s 2-2 draw at Monaco. On Sunday he will be hoping to bring down Ligue 1 leaders Lille.

Key stats
7 – Since leaving Monaco for PSG in 2017, Mbappe has scored seven goals in seven appearances against his former club, including one hat-trick in April 2019 and a brace in the last meeting of the clubs in November.

10 – Monaco are unbeaten in their last 10 Ligue 1 games, winning eight and drawing two.

6 – Leaders Lille have won their last six away league games, matching a club record dating back to 1949.