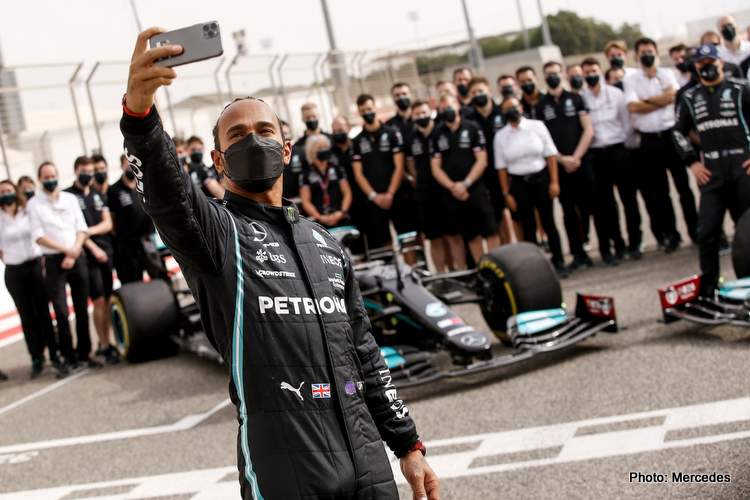 Writing-off Mercedes would be a foolish thing to do ahead of their 2021 Formula 1 season despite the World Champions’ below-par showing during preseason testing in Bahrain.

Nevertheless, it has to be reported that the soundbites coming out of the Mercedes garage are somewhat bleak, suggesting this time they may well have a problem on their hands.

Mercedes are notorious for downplaying the ‘favourite’ tag that they cannot shake ahead of each season, but an underwhelming three days of track time in Bahrain and comments from their camp since then suggest Red Bull may have the upper hand ahead of the season opener.

Strategy boss James Vowles said in a debrief: “I’d say Red Bull are ahead on performance, they are the class act from the test, but it is a test, it is not a race and it is one event out of 23.

“Will it be a close season? I would say so. Red Bull are a fierce adversary, they’ve got a strong package and clearly came out of the box very, very quick. The result of that is across the season and across different types of track layouts, I am sure you will see us move forwards and backwards relative to them.

“I don’t believe we are going into this particularly finding all the performance that is missing or being ahead of them. So, in short: yes, I think we are going to have a close championship this year.”

As the Mercedes quest for 16 F1 titles in eight years continues, it was clear that the W12 was not plug-and-play, while both Lewis Hamilton and Valtteri Bottas were never comfortable with a car whose sweet spot appears well hidden.

Vowles explained: “It was pretty evident from that, that the car was handling poorly and, conversely, the Red Bull, in fact, looked what we would call planted but it was a very stable car especially through the last sector of the lap.

“And I think that’s a fair observation, it was visible to the outside and I would say the lap times mirrored that as well. But it’s also fair to say that we don’t have answers as we are sat here now, it is just 24 hours after the end of the test.

“We have huge amounts of data available to us and now a long journey ahead to try and understand what was causing that,” explained Vowles with reference to the fact that there are eight Mercedes powered cars on the grid this year; more than any other PU-supplier,

His colleague, trackside engineering director, Andrew Shovlin added: “The wind made it tricky, when it’s behind the car you lose a lot of downforce because the airspeed is reduced so some corners where the wind was behind, it was prone to doing that, and then also the tyres are quite easy to overheat on that circuit and if you start sliding, you tend to lose grip and it gets worse. So, there are a few problems.

“Hopefully when we get to the race weekend it won’t be so difficult for the drivers because they were having to work pretty hard to do the lap times that they were doing,” concluded Shovlin.

Mercedes have been on the back foot before and really where they stand will emerge on the weekend of the forthcoming season-opening 2021 Bahrain Grand Prix.

However, do not be surprised, when the chips are down in Q3, that those two black cars will feature at the sharp end of proceedings as they have the capacity and might to turn it around like few of their rivals are capable of doing.

The debriefs are BACK! 🙌

James and Shov kick off the new 2021 @F1 season with a special debrief on testing, answering some of your burning questions from our three-days of running in Bahrain with the W12… 👀