Cascadia foes the Seattle Sounders and Portland Timbers continued their preparations for the start of the 2021 MLS Season with a pair of friendlies at the Sounders’ Starfire Sports in Tukwila, Wash. on Tuesday. The games also marked the Timbers’ final preparations before their 2021 season begins with a trip to Honduras to face CD Marathon in the Concacaf Champions League.

The sides ended the first half goalless, but traded opportunities in the second. Eventually, the deadlock was broken by the recently returned fan-favorite Fredy Montero in the 62nd minute. Montero struck for the Sounders two minutes after Felipe Mora came close to putting the visitors ahead through a header.

The Timbers, though, salvaged a draw with five minutes to go. Yimmi Chara set up Dairon Asprilla to find the net.

85th minute – goal Timbers! Yimmi Chara crossed the ball into the box, and it was headed home by Dairon Asprilla (duh). 1-1. #RCTID 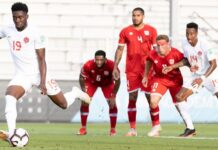