The Big Dance is here and women’s college basketball has had more depth and parity this year than perhaps any other season in recent memory. Here’s a look why each of the Top 8 teams has a shot at a national title, plus a look at the strongest and weakest teams in the 3 to 10-seed range. Stay tuned for our mid-major preview, which will take a look at the 11 through 16-seeds later in the week.

The Cardinal are steady and Williams has turned it up a notch lately — she had 26 points in the Pac-12 championship win over UCLA. Stanford’s only losses this season were to Colorado and UCLA back-to-back and it hasn’t lost since Jan. 22. Jones hasn’t wowed us with her numbers, but she is as versatile and talented as any other sophomore in the country. The Cardinal lack one truly dominant post player, but Brink, a 6-foot-4 freshman forward, has become a starter and has high scoring potential. Then there’s 6-foot-1 forward Fran Belibi, who plays bigger than her size. She even threw down a couple dunks this year. No team in the nation is more prepared for the neutral setting of the NCAA Tournament because the Cardinal were forced to play home games in Santa Cruz, Calif. for a stretch this season because of the pandemic.

UConn is a very good and balanced team on paper. Olivia Nelson-Ododa’s inside touch gives her the potential to be one of the most prolific scoring centers in the tournament and she could be an X factor because we already know UConn will get great things from freshman Paige Bueckers. Christyn Williams will also need to step up if UConn is to contend for the national title. Westbrook, like Bueckers, can be disruptive on defense and she adds another layer of talent to this roster that has been overlooked at times this season with her only scoring 9.2 points per game. The Huskies haven’t won the championship since 2016, but the UConn intimidation factor is still in place after it almost went away last year. Bueckers has re-solidified it with her phenomenal play this season. Because of her, UConn is truly feared and it needs to use that to its advantage and play with confidence.

Like UConn, NC State has great guard play and great post play. Cunane may be the most reliable star post player in the country — she has scored in double figures in all but one game this year — and Perez, a Cal State Fullerton grad transfer and NC State’s point guard, more than held her own in the ACC with 9.2 points and five assists per game in conference play. Brown-Turner is the team’s second-leading scorer behind Cunane and could be an X factor in the tournament. Meanwhile, Jones and Crutchfield both have the clutch gene and Boyd is a solid contributor as well. The Wolfpack have looked like a national championship contender since beating then-No. 1 South Carolina in their third game of the season. They also beat ACC foe Louisville when the Cardinals were No. 1 on Feb. 1. They have the potential to beat the other 1 seeds, for sure.

South Carolina has one of the best star duos in the nation and not just one of the best sophomore duos in Boston and Cooke. Also, Henderson is an underrated star point guard with tons of speed, distributing talent and shooting ability. Cooke is a better mid-range shooter than she is a 3-point shooter, but shot an impressive 37.4 precent from beyond the arc this year. If South Carolina can shoot well and put up a lot of points, they can beat anyone in the country. Boston was named co-Defensive Player of the Year in the SEC and ensures that the team is strong on that end of the floor. South Carolina lost four games this year, but they came against two 1-seeds, a 2-seed and a 3-seed. It is battle-tested from playing in the best conference in the country.

Maryland has the best scoring offense in the country. That’s what it is known for after being a great defensive team last year. If it is going to win the national championship, it is going to need to bring back some of that defense to complement its offense. Owusu has the potential to become one of the best players in the country and has improved quite a bit as a sophomore. She is fast and strong and can either get to the rim or create a mid-range shot for herself seemingly at will. The improvement has come in the finishing crazy lay ups department and she’s had some highlight-worthy moments this year. She is also a phenomenal distributor. Miller, a sophomore wing, is second on Maryland in scoring and won Most Outstanding Player at the Big Ten Tournament. Benzan leads the nation at 50.6 percent shooting from distance and has 88 makes, far more than Oregon State’s Aleah Goodman (second in percentage, 43 makes) and Bueckers (third in percentage, 55 makes). Like Perez, Benzan more than held her own in the Power 5 after transferring from from a mid-major (Harvard). With No. 2 Hoop Gurlz recruit Angel Reese back from injury, the Terps now have six players who average double-figure scoring and the sky is the limit for them.

Jones is a double-double machine, who is especially good on the boards and has improved as a scorer. She is Texas A&M’s best player, but many other players play key roles. Wilson is the team’s leading scorer, Johnson is another double-double threat and Nixon is a tough and clutch point guard. The Aggies defeated South Carolina in their regular-season finale to clinch the SEC regular-season title. However, they were upset by Georgia in the semifinals of the SEC Tournament. Texas A&M was still projected by ESPN to be a 1-seed after that loss, but ended up as a 2-seed on Selection Monday. It is as steady as any team in the country under the guidance of Gary Blair and could give NC State problems if the two teams meet in the Elite Eight.

The Lady Bears are led by Smith, the Big 12 Player of the Year, and play well together as a team. Richards’ numbers haven’t been very high this year, except when it comes to assists (6.3 per game), but her defense and intangibles are invaluable. Ursin has improved a ton and is an X factor that takes this team to another level when she’s playing well. Egbo is the second-tallest player on the team at 6-foot-3 and is a great inside scorer and rebounder when she can stay out of foul trouble. Lastly, Carrington, a Stanford transfer and the Big 12’s Sixth Woman of the Year, provides a big scoring boost off the bench. In the first committee reveal, Baylor was slotted as a 3-seed, but it had a had a strong run to finish the season and a strong run through the Big 12 Tournament, which it won. The Lady Bears, who won the last NCAA Tournament in 2019, are a dangerous team with a lot of great chemistry.

The Cardinals are getting left out of a lot of the talks about how strong the 1 and 2-seeds are and with no wins over ranked teams, it’s understandable why. However, they have a lot of talent on paper and could give Stanford problems in the Elite Eight. Evans is as good a team leader as there is in the country and has the ability to put the team on her back. With a superstar like that, Louisville is going to have a chance against any team in the tournament. Van Lith is also a player to keep an eye on because she is very versatile on offense and is better than her numbers indicate. The offense runs through Evans, but if Evans is having an off night, Van Lith is capable of putting up points beyond her season average. The Cards were the No. 1 team in the nation at one point this season. Don’t count them out.

The Bruins are one of the teams that beat Stanford this year and Michaela Onyenwere is coming off a 30-point performance in the Pac-12 Tournament championship game. Watch out for her and Charisma Osborne.

The Wildcats lack a dominant post player and average just 66.6 points per game. They are going to need an offensive spark if they are going to go deep in the tournament.

The Hoosiers have Mackenzie Holmes shooting 60.3 percent from the field. Add to her Grace Berger and Ali Patberg and you have a very talented and versatile big three.

Despite their wins over UConn and Baylor, the Razorbacks nearly lost to some of the weakest teams in the SEC.

Iowa’s defense is weak, but it’s hard to go against them with freshman superstar Caitlin Clark leading the way.

The Lady Bears had quite a few close calls in the MVC, including a one-point win over Valparaiso (12-13, 7-9 MVC)

Watch out for Naz Hillmon, who dropped 50 points in a game this season. She also has a strong supporting cast around her.

With Te-Hina Paopao likely out for the whole tournament and the team slumping, Oregon is going to need someone to step up big-time in order for it to go deep in the tournament.

The Wildcats were expected to do better than they did this year and, with a great defensive player in Veronica Burton and a great offensive player in Lindsey Pulliam, they could still make some noise.

The Crimson Tide have pretty much only beaten teams they were supposed to beat this year. They are good, but may have a tough time upsetting anybody.

The Bulls were ranked as high as No. 12 this year and feature some good scorers as well as a dominant rebounder in Bethy Mununga and an assist machine in Elisa Pinzan.

The Beavers finished the season strong, but their early-season struggles are still cause for concern and Syracuse and Oklahoma State are both pretty solid.

The Cougars feature freshman phenom Charlisse Legger-Walker, who is as clutch as they come, and the team can hang with talented opponents.

With their best player in Myah Selland likely out for the rest of the season, it’s going to be tough for the Jackrabbits, who have already been upset by Omaha (7-13, 4-8 Summit) in the Summit League quarterfinals.

The Spartans got off to a hot start and recently upset Indiana in the Big Ten Tournament quarterfinals to get back on track. They could be dangerous with the star power of Nia Clouden.

Central Florida is a solid team, but UNC has a win over NC State this year and Marquette’s only losses since Feb. 7 have come to UConn. 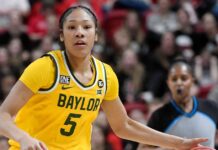 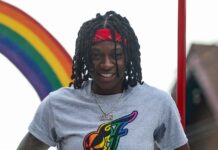 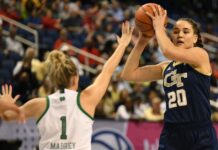