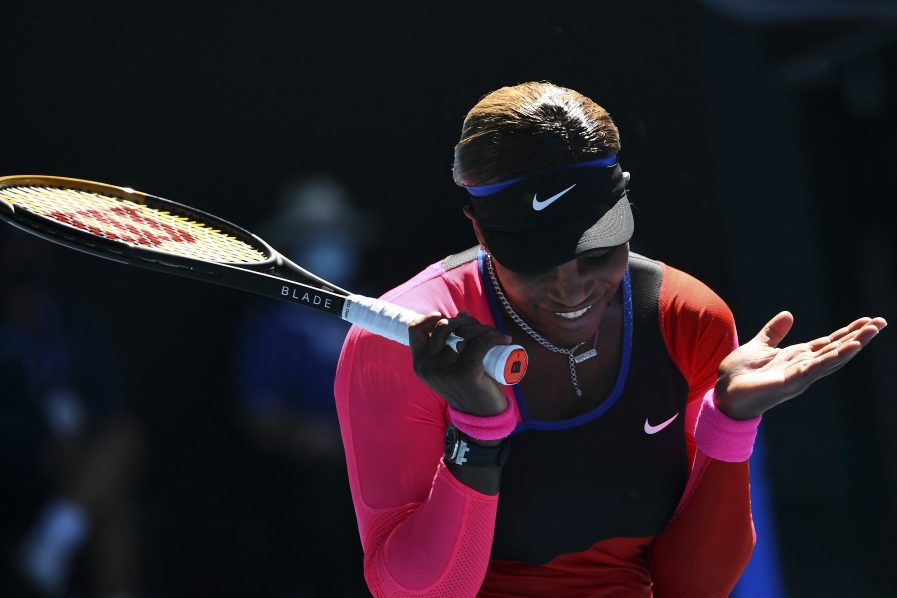 Serena Williams of the US reacts on a point against Japan’s Naomi Osaka during their women’s singles semi-final match on day eleven of the Australian Open tennis tournament in Melbourne on February 18, 2021. (Photo by William WEST / AFP)

The 2021 Australian Open came down to the tale of Serena Williams’ elusive quest and Naomi Osaka’s steady ascendancy. It was Osaka who had prevailed at the 2018 U.S. Open, in Serena’s first attempt for a 24th major title.

The American superstar arrived in Australia for another try at the record. It would be the right place to make it; where she won her first Grand Slam match in 1998 before losing to sister Venus in the second round. The quarantine and lockdown did not dampen her enthusiasm. Naomi Osaka considered it a good mental preparation.

Australia’s long-time powerhouse Samantha Stosur was defeated in the first round by American Jessica Pegula, 6/0, 6/1. Serena breezed through the first three rounds. Her 40-year-old sister prevailed in three sets over Kirsten Flipkens of Belgium in the first round but succumbed to injury and lost to Italy’s Sara Errani in the second round.

Canada’s Bianca Andreescu was the first seed to suffer an upset loss to Taiwan’s Hsieh Su-wei. The sixth-seeded Karolina Pliskova of Czech Republic lost 7/5, 7/5 to compatriot Karolina Muchova in the third round. In the fourth round, Naomi Osaka prevailed over Poland’s Iga Swiatek, while Serena outlasted Aryana Sabalenka of Belarus 4/6, 6/2, 6/4.

The top seed Ashleigh Barty of Australia was defeated by Muchova in the quarter-finals and Serena defeated the second-seeded Simona Halep of Romania 6/3, 6/3 in one of the matches that were dubbed “a final before the finals.” The major “might-have-been” was Osaka’s surviving two match points before defeating Garbine Muguruza 4/6, 6/4, 7/5. Jennifer Brady defeated Jessica Pegula 4/6, 6/2, 6/1 in the quarter-finals but had a close call in her 6/4, 3/6, 6/4 victory over Muchova in the semi-finals.

The battle royale was the semi-finals and the 23-year-old Osaka defeated Serena 6/3, 6/4 in a match expected to determine the titlist. Again, Osaka had halted Serena’ quest, as she did in 2018 in New York. The controversy generated by that match in New York overshadowed Osaka’s maiden Grand Slam glory. In Melbourne, the sadness of Serena’s failed bid also threatened to cast a pall on Osaka’s fourth major.

After winning the last point of the match, Osaka bowed to Serena, oriental style and Serena embraced her before she quickly left Rod Laver Arena, waving to the fans and having her left hand on her heart.

Osaka deferred to her idol, even after defeating Serena. She said that “after having watched her when a little girl, playing against her is an honour.” That is Naomi Osaka’s uniqueness in tennis. She had started playing with only the goal to defeat her senior sister Marie. It is difficult to overcome a competitor the one who hold in awe. Naomi Osaka is able to accomplish that rarity. She had cultivated the inner acceptance that “she (Serena) is just another competitor.

Serena was asked if she had thoughts of retirement. The question must have felt so heavy in her mind that she muttered a few words and became so overwhelmed by emotion that she said: “I’m done” as she left the Interview room in tears. Oh Serena!