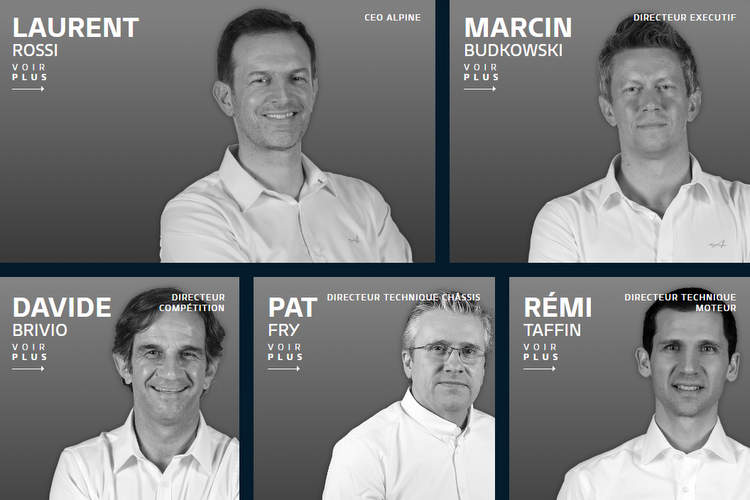 Two (or three or four or more) into one does not go, but that is not stopping the Alpine F1 Team from running a multi-pronged leadership setup for the former Renault team that welcomes Fernando Alonso back to the fold.

In the wake of Cyril Abiteboul’s abrupt and unexpected departure, the team appear to have done away with the Team Principal principle and instead have a top-heavy leadership quintet with Alpine CEO Laurent Rossi able to tap into the services of Marcin Budkowski (Executive Director), Davide Brivio (Sporting Director), Pat Fry (Technical Director Chassis) and Remi Taffin (Technical Director Engine).

Begging the question: Who’s the Boss??

Not long ago Renault tried a similar, albeit less top-heavy arrangement with Abiteboul and Frederic Vasseur trying the double-pronged leadership system which did not last too long.

The pair differed on fundamentals with the French manufacturer backing Abiteboul at the time over Vasseur who turned up as Alfa Romeo team principal where he remains. His former colleague has, for now, disappeared without a trace.

“Davide will be racing director. So the two will work in tandem to bring out the best in the car, which has been designed to put us in the best position for the future.”

This appears to narrow the options to Budkowski and Brivio, both with limited experience running an F1 operation, although the former does have massive experience and an illustrious record in MotoGP; if that can translate to success in F1 only time will tell.

Marca suggest that Brivio who will run the team on a day-to-day basis, with Budkowski supervising Pat Fry and Remi Taffin at the forefront of chassis and engine development.

Nevertheless, Abiteboul’s increasingly mysterious departure was indeed a surprise to the team members themselves, appearing to have caught all concerned off guard.

“Abiteboul’s departure was a shock when we found out, “Budkowski explained. “But hey, we reorganized very quickly, we have a new team and clear goals. Everything was already launched and it is a relief to have Davide here. I will probably start skipping some in the second half of the season and he has a lot of experience on the track, he knows how to handle the drivers, how to motivate them, how to organize a pit.

“It will be a great contribution to have him there, and we can share the role and make sure we don’t leave anything without the attention it requires. Our structure is slightly different than normal, in the end we are a French team and it has to be noticed, but the roles and responsibilities are clear. We just name the roles slightly differently.

“In Formula 1 today, with the complexity of a team, especially one that makes chassis and engines, we have a base in the UK, we have a base in France, there are 23 races, potentially 25 in the future, restrictions of COVID that mean possible quarantines, etc.

“Honestly, under these conditions, leading a team and going to all the races is very, very difficult,” added the former FIA Man.

Throw into this delicate balance of power Alonso and there is an explosive mix that is either going to make Alpine shine brilliantly or turn into a headless chicken.

Credit to Brivio for immediately understanding what is heading his way. He said of the returning two-time F1 World Champion: “We had some early chats and [Fernando] felt like a very normal guy, just extremely motivated, extremely willing to put together everything necessary to get the best out of the car, the best out of the team.

“He’s not coming back just to drive a car, he’s coming back to try to get some good results and to get some satisfaction. Yeah, he’s quite demanding, but that’s what I like. We need this type of driver that’s really keen to put everything together to try to [achieve] the maximum,” added the Alpine sporting director.