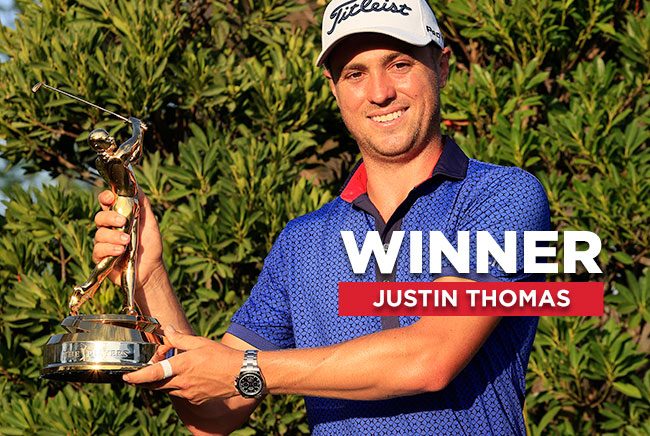 Lee Westwood’s attempt at capturing his second career PGA Tour title ended in another battling defeat after the 47-year-old Englishman was beaten by one stroke by Justin Thomas at The Players Championship in Florida.

Westwood suffered the frustration of being the bridesmaid for the second successive week, following his one-shot loss at the hands of Bryson DeChambeau at Bay Hill, after Thomas shot weekend rounds of 64 and 68 to finish on 14 under par, while Westwood closed with a level-par 72 to finish outright second on 13 under, one shot ahead of DeChambeau.

Westwood led heading into Sunday’s action at TPC Sawgrass in what was billed as a Bay Hill rematch, with he and DeChambeau in the final pairing. The Englishman birdied the first to get a jump on his rival, but then things unravelled for both players, with Westwood bogeying the second after finding water off the tee, before slicing his tee shot at the fourth into another water hazard, but only after DeChambeau had topped his tee shot 100 yards into a different pond. DeChambeau then leaked his third shot onto the cart path before making a wonderful recovery to escape with double bogey, while Westwood tidied up for just one dropped shot of his own.

The world number six birdied the seventh before both dropped again at eight, but when Westwood reclaimed his two-shot lead with a birdie at nine it looked like the rest of the field had failed to capitalise on their struggles.

But Thomas, meanwhile, surged into top spot after going birdie, birdie, eagle, birdie to reach 14 under par after 12 holes and give himself a two-stroke lead. A missed three-foot putt on the 14th, his first from inside that distance this season, saw the 27-year-old American’s advantage cut to one, before Westwood drew level with a superb birdie at 14, only for Thomas to hold his nerve and edge clear once more with a birdie at 16.

DeChambeau eagled the same hole to move within two of Thomas, but could not close the gap further and was left to rue his early double bogey.

Westwood was only able to par the par-five 16th, following two trips to the sand, and when he three-putted from 30 feet on the iconic 17th, the title was all but gone as Thomas parred last to need his rivals needing eagles to force a play-off. Battling to the last, Westwood birdied the 18th to give himself outright second, and earn another monster pay day which will secure his place in the European Ryder Cup team, one of his stated goals for the season.

Westwood, who turns 48 next month, said he felt like age was catching up with him on the final day in Florida. He said: “I didn’t quite have my game today. On Saturday I felt like my legs were just getting a bit tired and weak, and today I didn’t feel like I had my legs under me. I was hitting shots I don’t usually hit. I battled all day, made some nice putts. I slightly disappointed I didn’t win, but you can’t be too unhappy with a second place at the Players Championship. It just shows I am playing really well and my game is still good enough to win out here. It’s something to work on and hopefully I recharge the battery and keep this run going.”

American Brian Harman made three birdies on the back nine to also finish two back at 12 under alongside DeChambeau in tied third, while Paul Casey threatened to challenge, but his five birdies were offset by three bogeys to leave him at 11 under in tied fifth with American Taler Gooch. Shane Lowry finished eighth, while early frontrunners Sergio Garcia and Matt Fitzpatrick finished tied ninth after both closing with 72s, alongside Frenchman Victor Perez, who fired a final round 67.

For the final leaderboard from The Players Championship, click here.